I have been working with autumnal colours lately, courtesy of some friends who sent/brought yarn to my door.

The other night, I decided we needed a dishcloth suitable for the season, so I cro-hooked one, using a double-ended hook that a friend gave me. I like it. 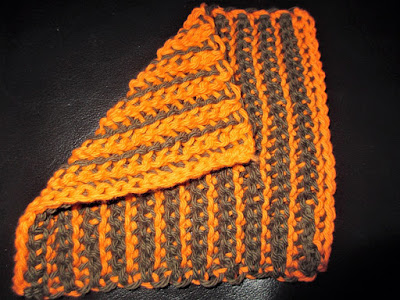 With this variation on Tunisian crochet, you get a fabric that has a different prominent colour on each side, as you see. It's fun to do. I have a scarf in progress that I am doing this way.

This afternoon, I finished weaving in the many ends on a large project, which will require two to photograph. Later on I will hold it and Bill can take the pics. With some of the scraps from that, I made a placemat. 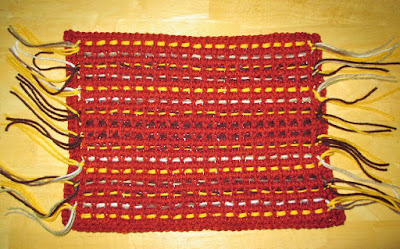 I did this in Tunisian crochet, using an extended knit stitch, which creates a solid row and a more open row on top all at once. I had planned to do surface crochet across the more open rows, but decided I liked the weaving better, so I did that using two strands of worsted weight yarn for each row across. Sometimes I used two strands the same and sometimes two different. I was fussily straightening out the twists, but then I stopped because I realised I liked it better with random twists in there, especially the undulations created on the rows where two different colours were used.

Although it's autumn and I have been working with brown, rust, yellow and orange, it feels a bit like Christmas! On Monday morning, a new charity shop popped up, so Monday afternoon, on our way home from getting groceries, we popped in. We were looking at the books when I suddenly bent down to a bottom shelf adjoining the bookshelves and started pulling out cones of yarn. Two out of the three were pushed to the back. When we went to pay, the woman asked hesitatingly of a euro per cone was OK. It was more than OK. They have a new home, of course. When we left the shop, Bill laughed and asked, 'What do you do, smell it or something?'  Yeah, something like that! 😉 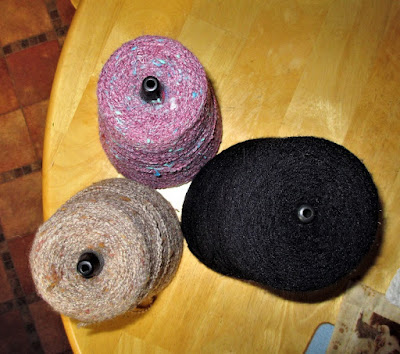 Today, one of the same friends who brought yarn in the past, brought more yarn and these great booklets called The Art of Crochet! There are a bunch of them, including a huge binder full! each booklet has holes punched in it to go into the binder and comes with a small skein of yarn! I will have many happy hours looking through all these! What treasure trove of inspiration and ideas. 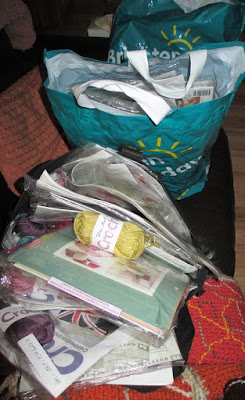 I even had a couple of books in at the library today!