Taking a Tumble in Tesco

For about a month, I have been having some muscle and nerve issues in my left backside and leg. When standing and walking the pain was manageable. When sitting for a while, it went away, but the actual process of sitting down or standing up involved some pretty intense pain. I was grateful that this was getting better and was at the point where I would feel twinges and a sort of tiredness in my leg at times instead of this intense pain, especially when we got the letter notifying Bill that he had an appointment at the eye clinic in Sligo to do his 6-month post-cataract-surgery exam. We set off on Wednesday morning on the earlier bus so we'd have time to find the new-to-us B&B where we'd be staying and Bill would have time to walk around and take some photos. We had a pleasant journey, and eventually found the B&B after asking a couple of different people. Google maps was not as accurate as it might have been and even the traffic warden's directions of, 'Go over there, turn right, and keep going' did not get us there. It was the helpful lady in the pharmacy that pointed us in the right direction. We did see this cute little front garden along the way. 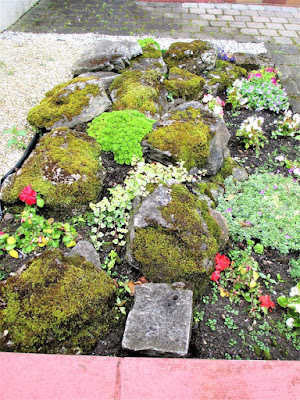 Once we knew where we were going, we decided to meander back into town, stop at Tesco to get some stuff for supper, and then head to the hospital. My leg was getting tired and I was looking forward to sitting down. By now we know where stuff is in this Tesco--it is laid out in a strange way, with the produce and bread off in this weird little area in the back of the store. We headed that way first, picked up some rolls and some fruit and were heading back to the main part of the store. Before I knew what was happening, I found myself stumbling forward, trying to keep my legs under myself. I failed at this and have a dim recollection of heading towards some poor woman looking at rolls. Next thing I knew, I was on the floor, stunned, and starting to register the pain. Somewhere in my mind, I was aware that the woman was not on the floor, too, so I must've missed her, and wondering whether something was broken. Then I saw Bill's feet and heard him saying my name. Some other guy was there telling me not to move too quickly and asking me if anything was broken. He said he was some sort of medic--I didn't catch the whole thing. I slowly sat up and got my backpack off. I moved my wrist and it hurt a little but wasn't broken. My leg was on fire. The medic told me to sit there for a minute, asked if I needed an ambulance, and when I said I didn't, asked if we were on holiday. Bill said we were actually on our way to the hospital for an eye exam and the medic said, 'Oh no! I hope not for this, too!' He and Bill helped me get up. I was lightheaded for a minute, but I thanked the medic profusely for his help and he went off. Bill and I proceeded to get our food and then walk to the hospital, about a mile up the road. I could see my leg swelling and figured it's be all sorts of colours.  On the way, he told me he felt something bounce off his head--it was the rolls I'd been carrying. That's when he turned around and saw me on the ground. For some reason, this seemed so funny to me and I started laughing. I must've looked like a maniac, laughing and limping along. I told Bill it was a good thing I wasn't carrying any eggs. 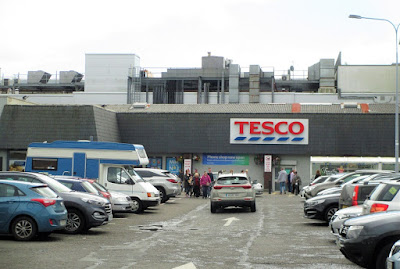 His appointment went well. His eye looks good and he has no need for further exams with that one. The other one is apparently just starting to form a new cataract, so the local optician will keep an eye on that.😉 It'll probably be a couple of years before that one is ready for surgery, they said.

It took a couple of hours for him to be done, and by that time, the little coffee shop was closed. This was a disappointment. When I got up and we were heading out, I was stiff, had a buzzing feeling in my head, and felt like I might pass out, but Bill got me some water and that did the trick. Off we went for the 1 1/2 mile-ish walk to the B&B. I was so, so happy to get into our room, flop onto the bed and get my leg elevated. I was even happier to get downstairs the next morning and get some coffee into myself. They had these little china cups--very lovely and all, but please just save time and give me a vat. Bill took care of me, though, saying a few times, 'You finished that already? Do you want more?' and getting up to refill my little cup.

Back to Tesco after that for some rolls and yoghurt for lunch. I looked at the rug where my mishap occurred and was surprised to see that there was no incline. I'd remembered myself going downhill somehow. Later on, I could see what had probably happened. There was a non-slip rug. I think my tired leg dragged and caught on it. It wasn't quick enough to get back underneath me as I stumbled and I fell. My knee seems to have been the first place to hit. My wrist and arm have some bruising, a couple of scrapes, and a bit of pain, but my leg is quite a sight. Later on, in Letterkenny, I caught myself twice more as my foot sort of caught on the floor and I stumbled again. Happily both times I was able to catch myself, but I was really careful after that to pay attention to lifting my foot up when I walked.

I was overjoyed to get home. Our friend had prepared supper, which was so wonderful (thank you, Karen) and it was a happy moment indeed when I crawled into my own bed, where I slept very well. Now I will just wait for the swelling to go down and the bruises to fade. I am grateful that I didn't break anything and that I was able to get around in Sligo and get home with a minimum of pain and discomfort. I can get around--not quickly or nimbly, but slow is OK. I'd brought some tatting with me and I was able to do that without my wrist hurting, so that turned out to be good--kept the wrist from stiffening up. I did some more tatting last night and will try some knitting today--after all, it's therapy now!