We went up to the garden this morning. It was a nice morning to be there--no sun, not hot, and with a nice breeze. I'm a little clogged, so might take a bit more allergy stuff, but pollen is supposed to be low today, so I figured it was OK to venture out.

Bill watered the stuff in the hoop house and I did some stuff outside. He picked the first tomatoes! 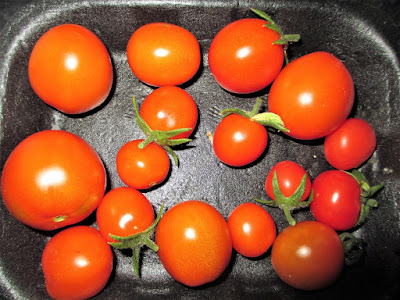 I scraped the weeds off the top of the outdoor bed and discovered a few spuds.

I planted a few more spuds in a different part of the outdoor bed, since we have space. The chard continues to grow really well and I will pick more of that in a couple of days. I think I will be pulling cabbage soon, too. I will plant more spinach and carrots. The carrots sprouted but just turned rusty and didn't grow and the spinach bolted really quickly.

We are learning some stuff about what will grow and what doesn't grow as well. Bill said he'd really like to do most of the outdoor bed in spuds next year and that seems like a good idea. We won't plant cabbage again. I wouldn't have planted it this year, except I felt like we needed to put something in the bed and it was available at the garden centre. Cabbage is one of those things that Bill isn't crazy about and I like sometimes, but I can buy it at the store and it doesn't taste any different. He also has to be aware of how much Vitamin K he is consuming, so might as well use up his quota on stuff he loves, like chard and broccoli!  I'd rather use the space for something else. So we are talking about doing 2/3 of the bed in spuds next year and the rest will be strawberries, chard, and maybe another thing or two. In looking at what other people have in their outdoor beds, we find a lot of cabbage, onions of various sorts, and spuds. Some people have all spuds. So we get a sense of what grows well outside the polytunnel that way and that helps us choose what we want to do with our bed. Our experience with a CSA farm in Maine has also helped us recognise what is worth growing because it tastes better and what really isn't worth growing ourselves. Since space is limited, choices must be made!

After the garden, we went to the shop for a few groceries. When we came out, we saw a little dog waiting patiently for his person, who came out a minute later. The dog's name is Stuey and his person showed us the rolled up packet from the deli, saying it was for Stuey to take his medication with. He handed Stuey the packet. Stuey was pretty happy as he took the packet in his mouth and went with his person. So cute.

I have some yoghurt straining in the fridge. I have learned that if I keep the yoghurt maker on for a little longer than the 10 hours they suggest as a guideline, it comes out thicker even before straining. It was a happy accident that I even discovered this. I forgot to turn the last batch off until it was on for an extra half an hour and I noticed then that it was thicker, so I left the last batch in longer too. It'll be ready in another hour. In the meantime, I'm off to make some lunch!