It's been a week of small discoveries so far. Yesterday we discovered an access point to the river trail right across the street from our house. Later, we were looking at the cheese selection in the shop on Main St and Bill spotted some pepper jack. 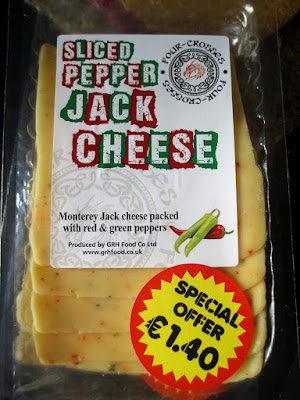 It's the first time we've seen pepper jack cheese in Ireland. We used to eat a fair bit of Tillamook pepper jack when we lived in Oregon and Alaska and there was some other kind in Maine that was good, too (but Tillamook is the best). They only had two packages in the store, and they came home with us, but maybe they'll get more. We'll keep our eyes open.

On Monday, Bill discovered a new pop-up charity shop in town. This is something we'd not seen in other towns, but in Moville, in addition to the two permanent charity shops, there is one further down the main road that has one group for 6 or 8 weeks. Then they clear out and another group moves in. yard sales are not very common here, although there is the occasional (car) boot sale, so maybe these pop-up shops serve the same purpose. The one Bill found is on a side street--the shop is usually empty, but since we've been here, there have been 4 or 5 charity shops in there for a few weeks at a time.

Anyway, he came home with a pile of books, saying they had good ones in there. I was particularly excited about this one: 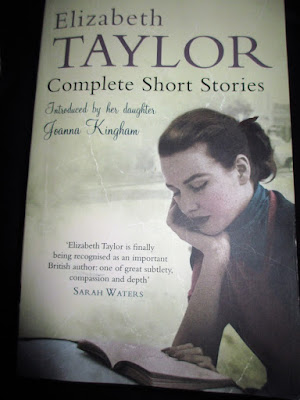 I started hearing a lot about ElizabethTaylor (writer, not the actress) a few years ago as her works was being 'rediscovered.' At the time, I read one of her novels, but wasn't aware that she also wrote short stories. I love short story collections, so when Bill saw this, he added it to the pile. Yay! Most of the books we pick up at the charity shops are ones we know we will read and then either re-donate or leave in the wee free library. Once in a while, though, we find books that we plan to keep--this is one of those. It will stay with my collection of short story collections!

He suggested we stop in again yesterday on our way to the shop, so we did. We came away with another pile of books. There was an older couple behind the counter and we were chatting with them. She talked about how great books are--much better than telly. She said that now she's not hearing so well, she has to have the volume up too high and it's not pleasant for the husband. At that, he joined the conversation, joking that this was just an excuse, because her goal is really to be able to ignore him.  She then commented about how frustrating it is to be near the end of a book and to be trying to get to the end, but having the eyes 'go funny' and to not be able to stay awake. He one-upped that, though, with his own book story. He was reading a book by Louis L'Amour, he said, which was some sweeping saga about the Middle East and migration and stuff like that (I was thinking that I had no idea that author wrote such things)--quite the tome, it sounded like! Well, just as he was getting to the point where he'd find out how it all ends, he turned the page and discovered that someone had torn out the last 5 pages. He looked and looked for a new copy, he said, but his search was in vain. Then he was in California and went into a Borders book store, where he found it, bought it, and read the last 5 pages. He said it was a happy day. I told him I think that, in future, I'd better check books before I buy them, to make sure all the pages are there. They were such a friendly, good-humoured, and affectionate couple. They made me smile.

I hope your world provides many opportunities for smiles and joy today.
Share
Posted by Shari Burke at 21.6.17