Bill and I were joking yesterday, as we walked to the bus station, about how Sligo is associated in our minds with eye tests. We know the loop from bus station to hotel to hospital quite well now, along with a few streets that branch off of our main route, but that's it. We talked about how we might go sometime and veer off in new directions, although we would stay at the same hotel, which we love.

On Monday we arrived, stopped at a grocery store to pick up some food, and headed straight for the hotel. 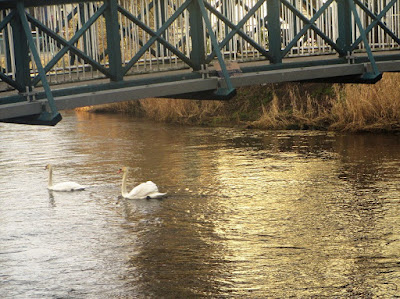 We were both really tired--I was operating on 2 hours of sleep--and did not want to go out again once we checked in. By 3:30 I was under the duvet in my nightgown and robe.

We had to get up early yesterday morning. I made coffee in the room and we had some instant porridge I'd found at the store. I boiled the water in the kettle. I was bummed to have to leave without having one of the hotel's wonderful breakfasts, but I did explain that we had to get to the hospital and asked if I could grab some yogurt and some of their excellent homemade granola to take with me and eat at the hospital. I'd cleaned out one of the porridge cups and I used that. A few hours later, sitting in the waiting room, it was the perfect thing.

The cataract surgery was uneventful and Bill left sporting a black arrow pointing to his left eye, and a plastic eye patch with holes. Before we left, we sat with the nurse, who could not have been more helpful! She called the local optician to set up his follow-up appointment 4 weeks from now. She went through the eye drop and other info. She gave us a voucher for a free coffee or tea in the cafe. And then we were done. We had just enough time to get to the bus station and catch the earlier bus to Letterkenny, which in turn meant that we could catch the earlier bus from there home. That meant we got home 2+ hours earlier than we would have if we had not caught that bus, but also that the chemist was still open when we arrived. We called in there, a few steps from where the bus left us off, got his prescription for the drops, and turned the corner for home.

We did not have time to use our voucher, but we were told that he will be back there for a routine look at the eye in 6 months, so we will use it then--LOL. And we think this time we might stay for an extra night or two and see a bit more of Sligo than the loop between hospital, hotel, and bus station!

That's better ja, an extra night in June or July ;-)