A couple of years ago, we got some vouchers from a local grocery store in the post. Also in the envelope were a few recipes, one of which was for banana pancakes. This recipe does not seem to be on the store website, so I can't link to it, but it was quite simple and required just a few ingredients. The directions were to mash up a couple of bananas and mix in three beaten eggs, a pinch of baking powder (optional), and a sprinkle of cinnamon. Then coat a pan with a but of oil and cook the pancakes in that. It sounded good, so I made them and they were fine. We liked them well enough, but I didn't make them again until last week, and when I did, I decided to make them better. Now I love them and I've made them three times in the past 10 days.

Here's how I make them:
Mash two or three bananas in a bowl (if they're smaller, mash three, if large, two). Stir in a bit of vanilla or almond extract and/or cinnamon, if desired.

Beat three eggs, add to bananas and stir together. This mixture will be very loose and runny. You can cook them at this point if you wish and they will come out thin and pliable--almost crepe-like.

I wanted them to be more substantial and I wanted to cook them on my indoor grill rather than a pan, so I wanted a stiffer batter. I mixed in a pinch of baking powder, some coconut, oats, and a bit of wholemeal flour. You could stir in berries, nuts, dried fruit, or chocolate chips, if you wish.

When I cook these on my indoor grill, I spoon batter onto the bottom plate and leave the top up. When the bottom is firm enough to get the spatula under, I flip them and then close the lid. They cook in a couple of minutes and it's easier, faster, and less messy than cooking in a pan on the stove, but a griddle or pan would work fine.

I didn't measure, partly because I almost never do and partly because the amounts depend on how runny the batter is before you add the dry ingredients and how stiff you want the batter to be. I added just enough to make it 'spoonable' and so it would not run off the side of the grill when I put the batter on. This recipe seems to be very forgiving in any case. Today I added extra banana and an extra egg so I could make a bigger batch and it worked just fine.

These are not traditional white airy pancakes. I don't do well with those--I get an upset stomach when I eat them, so I don't bother making them. These do not upset my stomach and they are packed with nutrition. They're substantial enough for a meal and with the whole grains, they stick with me. Best of all, they taste really great. The first time I made my version of these, we had them for supper topped with mascarpone cheese and thawed frozen berries (blackberries, raspberries, blueberries). 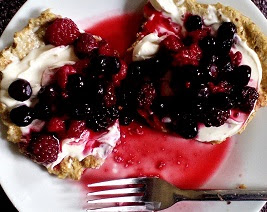 We liked it so well  that night that we had it again a few days later. I've also had them topped with jam. I plan to have these again tonight, but topped with pure maple syrup and berries.
Although I haven't tried this, it also seems like these would be good spread with nut butter, instead of using bread or crackers.
These have become something that I will keep on hand in the fridge. They are delicious, quick to make, healthy, convenient, easily adapted and versatile. I'm glad I came across the recipe again and decided to adapt it to better suit our tastes!

I hope you're well, safe, and finding moments of contentment during these strange days.

I don't know if we had this same conversation on 'the other' site or not but I know I started making the banana pancakes a few years ago. I could never handle the super bready/cakey pancakes GI-wise either and was raised with "Swedish Pancakes" which come out quite a bit like crepes. I think I read the banana pancake recipe on a GF low-carb page.

I agree with you about all you wrote, very versatile to whatever dietary concerns a person might have. I wind up wasting far too many bananas (which I often use to ripen avocados and various fruits in my fruit basket instead of just eating them). I don't make banana bread for the same reason I don't make the thick pancakes.

I've been thinking about starting a blog now as we're stuck-in... Not sure where I'd go with it. Things here are generally worse than ever so instead of being the rare one who has to self sequester for years already now I'm sharing all the same resources with the rest of the world. (Which means i'm most likely to fall short in the end.) I generally watch BBC/PBS sort of programming, reminds me of my happier days in N Europe and the UK etc. It's nice to see people treating each other humanely as a rule instead of talking about 'voluntary genocides by various demographics (disgusting lot who would themselves be required to be a part of it if they thought it through). If all this tumult does bring about the kinds of change our society needs it cant happen soon enough...

I like your idea of making a lot ahead for the various uses. When I first made them I did put sunflower butter on it so that matches with your idea.

Lots to catch up on here I messed about and mashed my foot into a few weeks of water - broke some toes and traumatized the others. I'll be glad when we haven't got to wash anything that comes in the door along with the bags of broccoli and cans of beans etc lol.

I hope numbers there are staying low! TC! Joy

Shari, these look and sound scrumptious!!!
Thank you very much for sharing!
Stay Safe both you and Bill ☕🌷

Joy, I'm sorry to hear about your foot injury! I hope you are now on the mend! Things are going pretty well here, considering the situation. According to the Chief Medical Officer, we have flattened the curve so much that we will probably not have a peak. The reproduction rate is down to below zero. I think the government has handled it well and the public has mostly been brilliant and following the guidelines. We will wait to see what happens in future once we get closer to 5 May, which is when the current lockdown is set to expire. No one really knows yet whether or to what extent these can be relaxed. The blog sounds like a good idea--you have lots of experience, as you say, and for people who are new to this stuff, it could be really helpful!

Those look really good, I may try them with the fruit instead of maple syrup.

Sounds delicious. I cook every morning for myself...simple foods...vegetarian so nothing exciting for others...my family loves my home made mashed potatoes, devilled eggs, strawberry salad, and salmon cakes...turkey and dressing...I make some of those to take to daughter's house when we are all together...of course, not at this time. Hope you are walking and reading...

Really good with the fruit, Vicki--Bill had it that way for lunch today. The thawed berries have their own juice, so that can be spooned/dumped on them as well. :-)

I'm sure the food you make is yummy, Brenda! I was veg for a decade myself :-) And sometimes the most simple food is the most delicious, especially if it's made by Nana!

Looks and sounds delicious, especially with the berries :)