Library Story: Sheep and a Serpent

When we were in Letterkenny yesterday, we called in at the library. As soon as we walked in the door, we spotted the library cart with some books for sale. These had been pulled from the library system. I was looking at one side and Bill was looking at the other. When he got to the last book, he called it to my attention, because it had a sheep on the cover. I looked at it, laughed and said, 'I can't possibly leave this here.' Turns out it's a mystery in which the sheep are the detectives and the smartest sheep is Miss Maple. This Jane Marple fan was intrigued. 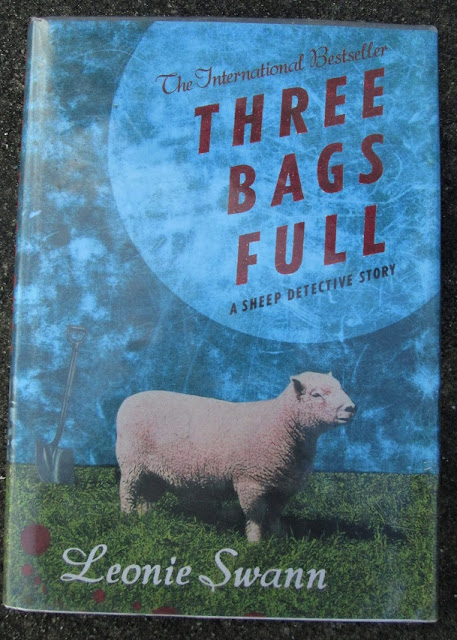 When I looked inside the book, I saw that it was translated by Anthea Bell, but it didn't say what language the book was originally written in. When I got home, I did a search and discovered it was German. I'm looking forward to reading this one.

Moving on into the library, I went to the art/craft section to look for the tapestry weaving book I'd seen on the website. I found it and a felt one that I did not know about. As I was walking by the fiction, I saw Sarah Perry and remembered her latest book. I'd started listening to the audiobook but didn't care for the reader, so decided to read the book at some point instead. I;d read her previous book and really liked it. Now, in my defence, I had to get up a few hours earlier than I usually do and that always throws me off, so my mind was not functioning as well as it should have. I grabbed the book and put it on the pile. I paid for the mystery and checked out the others. It is always roasting in the library, so when we got outside, we busied ourselves with removing jackets and stuffing things into backpacks. We walked to a bench, where we sat and had our sandwiches. As I was chewing, it dawned on me that the Sarah Perry book I picked up (The Essex Serpent) might not be the one I wanted. I pulled it out of my backpack, turned it over and immediately saw that it was one I'd already read. I could not remember name of the book I actually thought I was borrowing. Bill suggested that we go back to the library so I could return the one I had and not have to carry it home. After finishing our lunch and going to see a photography exhibit, we did that. I walked in, gave the book to the guy behind the desk and rather sheepishly said, 'I accidentally took the wrong book. I already read this one.' He laughed and said, 'No bother. I'll check it back in for you.' And so he did. Later, I remembered that the book I wanted is Melmouth. I'll get it eventually.
Share
Posted by Shari Burke at 6.11.19

I love the cover of Three Bags Full. I often forget the name of a book I'm wanting to read. I really should add it as a "note" on my iPhone.

I love the cover, too--it is appealing. I'm so used to just requesting books, having them sent to my usual branch and then dashing in to pick them up before dashing off again to catch the bus that I wasn't thinking ahead :-)