Swatch 2: This Time with Crochet

I spent this afternoon with my frame loom and some odd bits of yarn. 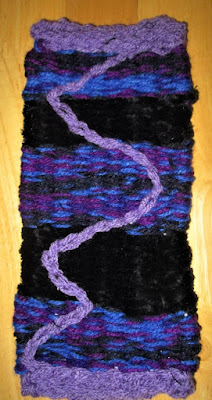 I like it, in spite of the flaws, and I learned a couple of things, so I'm happy. The edges are wonky, partly because of the differences in the yarns, partly because of the crochet, but mostly because I need to do a better job when I take things off of the frame. You can see at the bottom right where I pulled the warp thread too tightly, but I think I can even that out.

I should have used a dark warp since I was using dark yarn, but I just used the string that came in the kit--there's plenty left. If I was to start this again, I'd use black cotton or something like that.

I didn't know I was going to use the chunky black chenille until this afternoon, after I'd started. I had been thinking of doing things slightly differently, but then I didn't like the other yarn I'd pulled next to the blue/purple/black variegated (4 strands held together) I'd already started with, so I went upstairs and found the chenille I'd picked up at a charity shop a few months ago. That worked really well, although I had to sweep up after I was done because it shed so much.

I decided to try crochet for this for a few reasons. I wanted to see what it would look like. I wondered whether it would work instead of the footer and header (it does). Before starting, I was thinking about making shapes on the warp using crochet chain stitches, then filling in each space with a different colour. I could just make the shapes as I was weaving and then do some kind of embroidered outline after it was off the frame, but I was interested in starting with the line and going from there. I opted for a simple squiggle for this experiment instead of doing anything more elaborate. Now I know it works and I can play more with the idea in future. I was going to do one colour on one side of the line and a different colour on the other, but didn't think of the chenille until I'd already started.

Here's what I had when I started weaving: 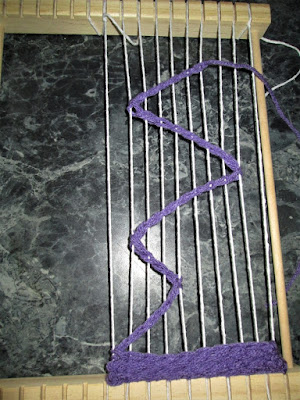 The chain did pull on the warp strings a bit here and there, but it didn't seem to make a difference, possibly because things got pulled a bit in each direction as I was weaving with the thick chenille and 4 strands of the sport weight yarn.

Anyway, it was a pleasant afternoon. I got more practice and learned a couple of things. I'm not sure what the next swatch will look like, but the other day Bill was off to recycle bottles and tins and called in at the charity shop. They'd had a bag stuffed full of skeins of eyelash yarn for over a month. I always left the bag there. After I got the weaving kit, I mentioned to him that I should have bought it because it would probably be fun in to weave with, so he stopped in to see if it was still there. It was and she only charged him a euro for the bag. I thought there were 6 skeins or so, but there are 11. Maybe my next practice piece will involve some of that.