Here's the rest of the mystery month selection (I posted the first bunch yesterday):
The Adventures of Maud West, Lady Detective: A Remarkable True Story by Susannah Stapleton
I wrote about this book here.

This is the first book in a series featuring archaeologist Ruth Galloway, who lives in the edge of marshland in the area that used to be Doggerland. It was these two things that led me to give the book a try. Dr Galloway, a professor at a university, is called in when someone finds a body in the marsh. It is thought that it could be the remains of a child who has been missing for a decade, but it is actually bog body from thousands of years ago. The detective who consulted her asks for her help in solving the case.

The reader was good and the story pulled me in, even so some of it seemed a little it predictable and I could see it coming. Still, it was good enough for me to reserve the next book in the series. I particularly love the setting and the descriptions of the landscape. One thing I love about the e-audiobooks from the library is that I can try them out without going to pick anything up or buying anything and if I don’t care for the reader or the book, I simply return the title and delete from my mp3 player. Edit: I found the second book in a charity shop the day before I was due to get the audiobook, so bought it and cancelled the reserve.

Bodies from the Library by various authors, selected and introduced by Tony Medawar
I came cross volume 2 when scrolling through the e-book section of the library website. I’d not heard of this, so I went in search of more info. Then I went back to the library website and searched for volume 1, found it, and placed my request. This is a collection of short stories written by Golden Age authors, all of which have only ever been published in obscure magazines or not at all, until this volume. What a treat! 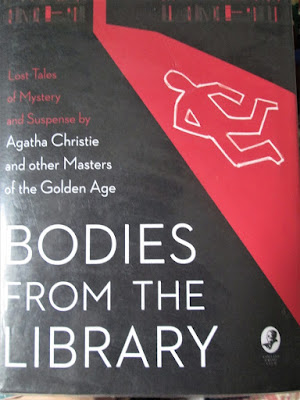 Bodies from the Library Volume 2 by various authors, selected and introduced by Tony Medawar
This follows on from the book above. I liked it, but the first couple of stories seemed a bit outside what I’m used to with writing from that era. I found the first story particularly disturbing and I almost stopped reading. I googled to find some reviews and after reading those, decided to continue. I’m glad I did!

The Crocodile on the Sandbank by Elizabeth Peters
This is the first in the Amelia Peabody series of mysteries, which was recommended to me. I’m glad to have been told about it! In the 1800s, Amelia Peabody is a 30-something ‘spinster’ who has cared for her father and been underestimated. When the father dies and she inherits, there isn’t much distress on the part of other family members until they find out that there is more to inherit than they thought! Unsurprisingly, suitors come out of the woodwork. Fortunately Ms Peabody has a good head on her shoulders, rebuffs them all, and proceeds to travel. In Rome, she comes across a woman who has passed out in the street from hunger. She becomes Amelia’s companion and off they go to Egypt where they meet the archaeologist Emerson brothers in the course of their travels. At the dig site, shenanigans ensue. Some of the things that happen in the story are quite implausible and some are predictable, but that was fine with me. I thoroughly enjoyed this book. I love Amelia Peabody and I did not expect her to be so funny. I laughed a lot at her turns of phrase.

After I finished the book, I looked at some of what was written about it and discovered that the author had originally intended it to be a one-off, which explains why everything was tied up neatly by the end of the book. Often in series, the main storyline is cleared up, but the characters are left in situations that you know will be taken up in the next book. Since this wasn’t intended to be a series, that’s not the case here. People apparently wanted more Amelia, though, so a series it became. That’s good, because I also look forward to more Amelia Peabody and I’ll be proceeding to read the rest of the books. Thanks, Mollie, for the recommendation!

They all sound good, especially The Crossing Places & The Crocodile on the Sandbank.

I was glad that someone recommended the Amelia Peabody series. It was fun. She is a great character. Nice to have come across the other series, too. I think that one is up to 12 books. I have 2 from the charity shop and can get 3 and 4 in audiobook from the library. If I get that far, I'll decide whether I want to start requesting the rest from the library.