We were in Donegal Town today, so we called in at the Animals in Need charity shop. The volunteer woman was almost buried under bags of donations so we were happy enough to make some space. Bill found a pair of pants--they have lots of pockets, which he likes. I picked up a couple of books. Oddly, one of the books I picked up was one I had reserved in e-audiobook format. I try to not have too many audiobooks checked out at one time and I have one downloaded already. I have others reserved, but they are not due to be available for weeks. One came in early, though, so that gave me two, plus one that was going to be coming in tomorrow. I decided to cancel that reserve and look for it again some other time. When I saw that very book in the charity shop, I bought that. Weird timing.

Bill spotted this wee jug and I told him we'd take it. I love it. 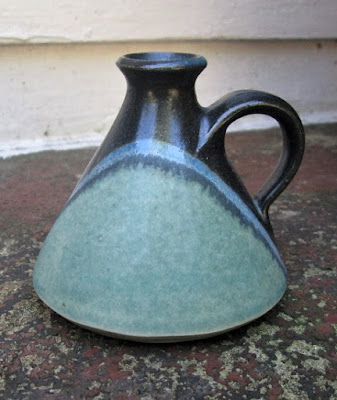 It's a handmade piece--potter's mark is on the bottom. I find some pottery videos weirdly relaxing, so sometimes I sort of zone out and watch someone create a cool bowl, vase, cup, or whatever. As we were waiting for the bus and I was looking at this, I thought about how I have some idea about how it was made because of those videos and this makes me love it even more.

The first thing I picked up was the yarn--it was a good day for yarn. These are all wool. I've thanked a sheep, although this is probably old enough that whatever sheep created it is now no longer with us. 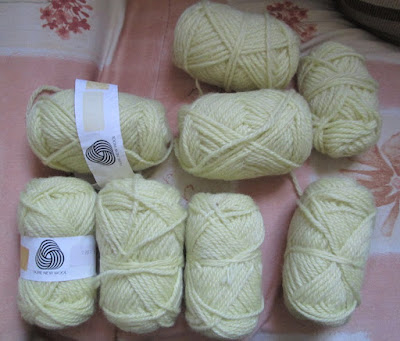 I never leave that charity shop without checking the necklaces to see if there are any to deconstruct for beads. I was not disappointed today. 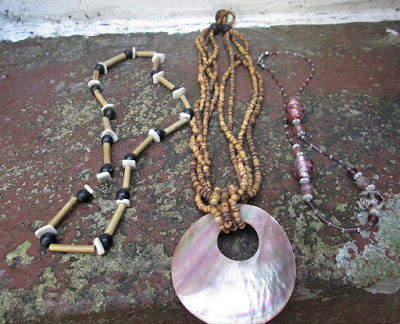 The middle one was in the free basket--love that shell and all those tiny wooden beads. The tubular beads in the necklace on the left feel like bamboo and the round ones are wood. The necklace on the right is hard to see, but there are three large glass beads and a bunch of smaller ones. 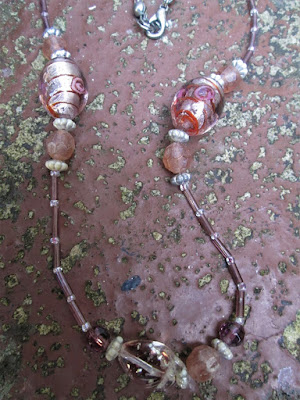 I also like those little metal separators--they come in handy as embellishments in their own right.

As I mentioned in yesterday's post, I took my new upcycled bag for a test run today. As I was stuffing wool into it at the charity shop, the woman commented, 'That's a nice bag.' 'Thank you,' I replied. I told her it was a cushion cover that I'd turned into a bag. 'No way!' she said and asked me if I made the handle. I nodded and an older woman craned her neck to look. 'Sure it was a cushion cover! I have those very cushions at home!' she said. They commented on how clever it was and were still talking about it as we walked outside. Made my day.

I love that shell necklace in the middle of the first jewelry photo and the jug.

It's neat that people are commenting on your upcycled bag!

I don't know why that necklace was in the basket of freebies--there's not a thing wrong with it! Sometimes they put stuff in there that has a broken piece, but not so with this one. I have decided not to cut it apart yet--I might end up using it as it is. I have a couple of ideas. :-) My original intention was to cut it apart and use the beads, since I thought it would be broken in some way anyway, but seeing that it's intact, I might change course.