I Am, I Am, I Am: Seventeen Brushes with Death by Maggie O’Farrell
I saw this book in our local charity shop and bought it. I like O’Farrell’s fiction and had heard her talking about this book when it came out a couple of years ago. At the time, I thought it was an interesting, if a bit odd, way to structure a memoir. It works well and reads almost like a book of short stories. I kept having to remind myself that all of these stories involve the same person. Some of the stories were chilling, some reminded me that we never know what someone might be going through as they try to make their way through each day, and some reminded me of episodes from my own youth that could have ended very badly. Each begins with a description of a moment in the author’s life when death was lurking nearby, then unspools backwards to describe how she got there and in some cases, how that moment was a result of a previous action or circumstance. She’s a wonderful writer and even a book that is organized around brushes with death was a pleasure to read because of it.

Nomadic Felts by Stephanie Bunn
This book was a happy surprise. I found it when doing a keyword search on the library website and requested it. I expected it to be full of photographs of various felt items--and it was and there was some incredible felt work shown in them. But while I expected the photos to comprise the main part of the book and to be supplemented by some brief explanatory text, it was not like that at all. The author is an anthropologist with a specialization in material culture who has done research in Kyrgyzstan, so the book provides explanations of the felt making process, how it fits into the communities discussed, what it is used for, the division of labour in feltmaking, designs, and more. It is a substantive book but not written in academic jargon--it’s quite readable and fascinating for anyone interested in cultural importance of felt/textiles. I loved this book and am so glad I stumbled across it!

Cocktail Bar by Norah Hoult
I first read about this author in the introduction to The Long Gaze Back, edited by Sinead Gleeson, who included a story by Hoult in this anthology of short stories written by Irish women. She talked about how Hoult’s work was out of print and largely forgotten. Since that book was published, there has been increasing interest in Hoult’s work and it has started to be republished. This is one such collection.

Midnight in Chernobyl: The Untold Story of the World's Greatest Nuclear Disaster by Adam Higginbotham
I read about this book in a New York Times Book Review email, placed my hold, waited until it came in, read it, and then listened to the podcast. What a great book! The author became interested in Chernobyl when he was doing some long-form journalism for The New Yorker (I think). He talked to some of the people involved and kept going back. Finally, after reading a book about the Titanic, he realized he wanted to give a similar treatment to the people of the Chernobyl disaster, so began working on this book. The book begins with chapters that alternate between stories of individual people and explanations of how reactors were designed in the USSR, how they worked (and how reactors are supposed to work, which is a crucial difference!), the politics of the nuclear energy industry there, the design flaws of the reactors, and how these flaws were overlooked. In this way, the reader gets not only a good basic understanding of how the problem started, but also gets to know actual people and sees things from their point of view. It is easy to feel a connection with the people, so the book becomes more personal and not just a dry re-telling of an historical event.

To me, this book red like a novel, but was even more heart-wrenching because it actually happened. Higginbotham is an excellent writer--I kept turning pages and feeling the tension building. By the time I got to the night of the disaster itself, I was reading with a sense of dread. Once the worst has happened, the author tells us about the aftermath, which is an incredible story in and of itself. The capacity for human denial continues to amaze me. For example, hours after the explosion, the guy in charge of the plant is in a bunker with some others and is talking about getting Unit 4 back up and running as soon as possible. Someone who has seen what is left of Unit 4 tries to tell him that there is nothing left to get up and running. This guy is told that this is clearly nonsense, because it is, quite simply, impossible for these things to explode. Then again, many of the people who went to work there had to learn on the job. One of the ‘nuclear engineers’ took a correspondence course to learn about nuclear physics.

The Choir by Joanna Trollope
I found this book in the wee free library when we went to drop off a few of our books. It’s a small English village novel, which I generally like, so I brought it home, read it in between runs to the library and will now return it to the wee free library. It was a fun read, about the power struggles amongst various factions in a school for boys and in the wider community. The school is tied to a cathedral, which owns many of the village amenities, but which has serious structural issues. One guy wants to pay for the refurbishment of the cathedral by eliminating the choir. Needless to say, this does not sit well with the choirmaster. There are also interesting political and personal things happening in the small community of people associated with the school. This book was published about 30 years ago, but some of the underlying issues are still relevant today and we see the same sorts of struggles--class, socialism, religion, town and gown conflicts, the role of women are all here in this book.

That's it for my April reading list. I have May underway 😀

I hope there are some wonderful books in your reading pile, too! 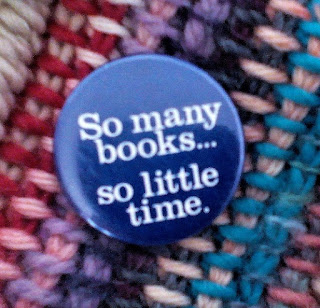 They all sound interesting, especially the O’Farrell book. Maybe I can find it here.