It was a library day today, so off we went. For some reason everything was running early. This is not common, so when it happens, it's something we notice. We were heading for the bus stop when Bill commented that the bus was already there. I looked at my watch and saw that there were still 8 minutes before it was due to leave. We were close and could have flagged him down if necessary, but we picked up the pace anyway. We got on and were heading for a seat when, with a lurch, the guy pulled away and off we went. I plopped into a seat, got out my crocheting and ended up using the foot rests to brace myself. The guy was zooming right along. We've been on many buses where the driver knows he/she is running late and gets a bit of a lead foot when the opportunity arises, but this guy was early, so I was wondering whether he was just in a hurry to go on his lunch break or something. We sped along the road, got to a nearby village, stopped, and proceeded to sit there for a while. Then we were off again, slowing down when he got behind a tractor and couldn't pass right away. As soon as the opportunity presented himself, he went around the guy and sped up. At one point, he stopped on a dime to pick up a guy who was running after the bus. Bill's backpack fell from the seat to the floor with a loud thunk, someone else in back dropped their stuff, and we all jerked forward and then back as the bus came to a stop. Thankfully, my face did not hit the seat in front of me and I crocheted on through the road works, and into Donegal Town, where we arrived early--first time that's happened, I think.

We meandered around the charity shop for a little while. I bent down to look at the bottom shelf of one of the bookcases and spotted a copy of Lionel Shriver's We Need to Talk About Kevin. Bill and I had just been talking about that book the other day. I read it a couple of years ago and found it quite powerful and I was saying he should read it. Then, in a pile on the floor, I saw another book I read a year or so ago--One Good Turn by Kate Atkinson. The book kept me off balance until the very last sentence. I pointed the book out to Bill, who picked it up to look at it, revealing this book: 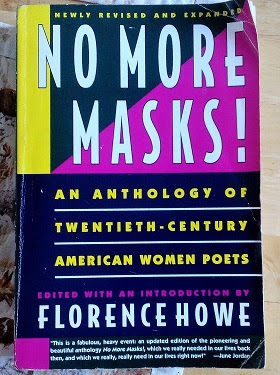 'Uh, Shari, anthology of women's poetry,' he said, pointing. 'Oooh, this one's a keeper,' I replied as I bent down to snap it up.

Outside, Bill rearranged his backpack to accommodate the new books and we headed off to the library, passing the librarian (who was still on his lunch break) on the way. He greeted us and told us he had books for us. He was heading in the opposite direction, but we left him to enjoy the rest of his break and continued on. He ended up back at the desk early, so we returned stuff, picked up stuff, chatted, and still got back to the bus stop with plenty of time to spare.

I have no idea why there was so much earliness going on today. It is not the usual way of things. But now that's over, maybe everything will go back to being 'casual' now. I've gotten used to casual and I like it! 😉
Share
Posted by Shari Burke at 26.2.19

LOL- I felt like I was lurching right along with you on the bus there, Shari. I really enjoy reading these 'diaries' of your daily adventures.
Isn't it fun to find great books? Working at the VA we can pick up free books from the book cart and either return them or pass them along. I have found some great books there. xo Diana