I Should've Had My Backpack!

We went to Donegal Town today so we could go to the library. As we usually do, we went to the Animals in Need charity shop and to Aldi before going to the library and then getting the bus back home. I brought a regular tote bag and not my backpack, since I planned to just pick up a pouch of coffee and a couple things of cheese in Aldi, and Bill had his backpack (full of library books) in case we found anything at the charity shop. So much for those plans!

The charity shop has an abundance of books. There were full shelves and overflowing boxes in front of the shelves. I bent down to look at what I could see on the bottom shelf with a box blocking some of the books in the corner from view. I found these. 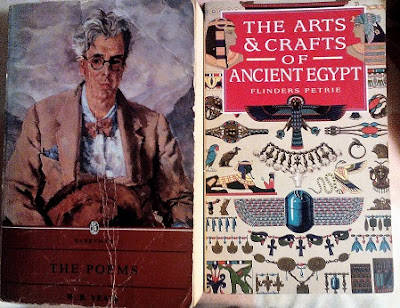 I must admit that ancient Egypt is not a particular interest of mine, but of course, arts and crafts are, so I figured the book might as well come home with me. And I was quite pleased to find the W.B. Yeats volume--I had one that didn't make it into the bags when we moved to Ireland. As I recall, at the time, I figured that I could find a collection of his poetry once I was here and today was the day! It's a few inches thick, so of course I would find it on a day when I did not have my backpack and bags were full.

In Aldi, we ended up getting rather more than we expected. We figured we might as well pick up some jars of nut butter while we were there. Then as I went to grab a pouch of coffee, Bill pointed out the jars of chocolate and caramel flavoured instant coffee that they had. I sometimes get a hankering for flavoured coffee, but that isn't usually a thing here, so with a few exceptions, I just wait for it to pass. Given that these were located with the rest of the coffee and the brand name is the same as the Aldi coffee brand, I have some hope that this will be a regular offering in the store. They also had hazelnut, I think, but I skipped that and got a chocolate and a caramel. After we got what we wanted, we found ourselves in the centre section of the store, where the special buys are. These are things that come and go. At the moment, there are items left from Christmas, including the other two coffees--amaretto almond and Irish cream. 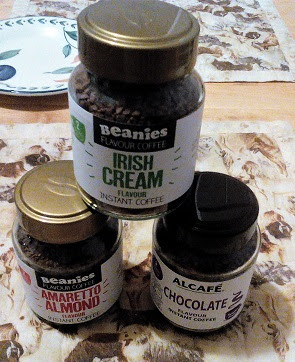 There was also gingerbread, which I didn't buy. These were on clearance and a different brand, so I don't expect to find them there whenever I am next in the store. Then, when we were heading for the till, I spotted the chai that I tried when I put in an order at a shop in Galway. In that shop, they had chocolate and vanilla. The first time, I tried the chocolate and liked it. When we did the next order, I decided to try the vanilla, and to my surprise, I liked that better, so I planned to get more of that whenever we put in another order. But there it was, in Aldi, and over a euro cheaper--another Christmas item on clearance, I think. I bought three of those, too. 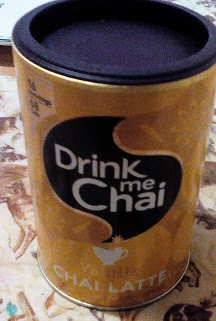 Since we had rather more than we thought we would, Bill had to remove the library books from his backpack to fit in some of the goodies we'd gotten. Then the books had to go in another bag while I took some of the other food. To top it off, so much of what we bought is in glass, which is great, but heavy and tends to clink together in the bag! Next time we go, I'll bring the backpack even if I think I won't need it--and if I do that, I probably won't need it! But if I don't bring it, I'll wish I had it!