I decided to try making vegetarian shepherd's pie with some of the soya mince I recently got. I viewed it as an experiment and kept my fingers crossed!

The soya mince is dehydrated, so before use, it gets rehydrated in boiling water. I placed a cup of mince in a bowl and just barely covered it with boiling water. Then I left it to sit there while I went on to the next thing, which was chopping carrots into small pieces. I put these on to cook and chopped some potatoes. When the carrots were just about done, I added some frozen peas to the pot. When it went back on the boil, I removed it from the heat. When the potatoes were almost cooked, I added some frozen cauliflower that I'd thawed and chopped and let that heat through. I drained the peas and carrots and the soya mince and mixed them in a greased baking dish. 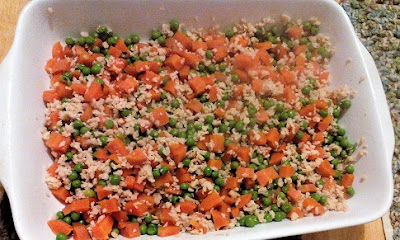 Then I made some gravy by putting a puddle of olive oil in a pan, to which I added a couple of onions, diced, a yellow bell pepper, diced, and a few cloves of chopped garlic. I cooked these in the oil, stirring around, until the veggies were cooked. As they were cooking, I prepared the bouillon. 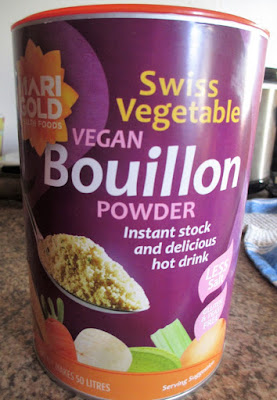 We love this stuff! A friend gave me some a few years ago and I've not been without it ever since. I use it in soups or on its own as broth, but it makes a nice gravy, too. I find that it's best not to add it directly to the dish, because it lumps up, so I place some in a bowl, add a bit of boiling water, and whisk it well. I then add it to whatever I am making and it blends in better. 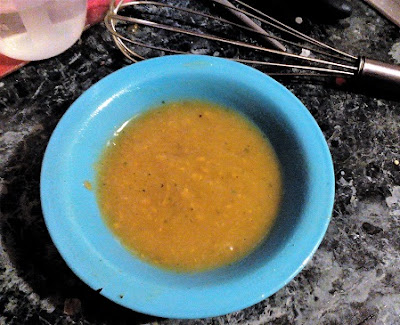 Once that was ready and the onion/pepper/garlic mixture cooked, I added a few tablespoons to plain flour, stirred it all into a lump, and added some water, stirring until thickened. Then I added some mixed herbs (thyme, sage, oregano, basil, marjoram, and parsley) and the bouillon, stirred it in well, and let it bubble away for a few minutes, before pouring the veg gravy into the baking dish and mixing everything up. 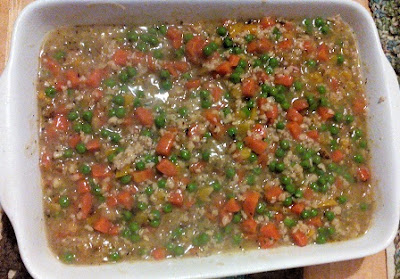 I drained the potatoes and cauliflower and mashed them up. Here's where this becomes non-vegan. I used butter in the potato cauliflower mash, but you could use a vegan spread and that would take care of that!

This was spread over the top of the veggie/mince/gravy mixture and placed in the oven for 10 or 15 minutes. I could have left it in longer so the top browned a bit, but we were hungry and everything was already piping hot going in, so we waited no longer! It is soooo good! Years ago, we used to sometimes buy Amy's Kitchen vegetarian pot pies, cook them, and dump them on a baked potato. The peas, carrots, and gravy reminded me of the flavour of the pot pies, although they used cubes instead of mince. The mince has no flavour, but absorbs the flavour of whatever is in the dish. It is mainly there for nutritional purposes and for 'chew.' It does give you the texture of turkey mince (or, I suppose, beef mince, but I haven't had beef in years).

There's plenty left, so it'll be the same tomorrow, but without the work! 😋

As I was making this, it dawned on me that I could make things a lot easier by using red lentils and what they sell as broth mix here--a mix of barley and various dried lentils and peas. I could just make the soup that I usually make with these things and various veggies in the slow cooker. It thickens itself beautifully and at the end, I add the bouillon and water. That would work just as well as a base for this, topped with the potato-cauliflower mash and baked. Or it would be a way to use leftover soup, since one batch goes a long way.

In any case, I consider this experiment a success! We both had seconds. 😉

Sounds yummmm
I will omit my detested peas and of course I have avoid soy when I can
Will use butter or margarine yummm
Looks so so good
Thank you!!!!