Tea and Books in the Autumn Chill

We took a brisk walk to the shop today to pick up some more tea bags before the storm arrived. OK, we also picked up a wee bit of chocolate and a package of biscuits--and bananas. There was fruit! 😏

The wind was starting to kick up on the way home and it was chilly. I was thinking that last week, I dressed for a day like today and was too warm. Today I could have used a cowl and a heavier sweater. Oh well. I'd rather be chilly than hot.

We've moved from drinking lots of coffee every day to drinking a little coffee but many cups of tea in the course of a day. Bill has even floated the idea of taking a break from coffee and having tea in the mornings. I said I'd be OK with that. I'd always keep tea bags in the house, and sometimes had a cuppa, but I never knew which ones to buy. I tried some when we got here and wasn't wild about them--then had a gazillion tea bags sitting around. In the last place we lived, I found a gigantic bag of Punjana tea bags. We'd had that kind before when we lived in Maine and I knew they were good, so I bought a bag. Not many things come in large sized packages here, but tea is one of them. Of course, because we didn't drink that much tea, the 440 tea bags lasted a good long while. While we still had that bag, we moved out of the moldy apartment and into a house down the street and around the corner, where we found that the previous occupant had left a partially full box of Lyons Tea. There seemed no reason to waste it, so I figured I'd use them. I loved it from the first sip. Bill tried it and was equally smitten. We finished that box and then went back to the Punjana, which was not as good. By then we were nearing the end of the bag, so we made ourselves finish that before making the switch to Lyons. We've been through several boxes of 240 since we made the switch. It says on the box that it's 'Ireland's Favourite Tea.' I can see why. 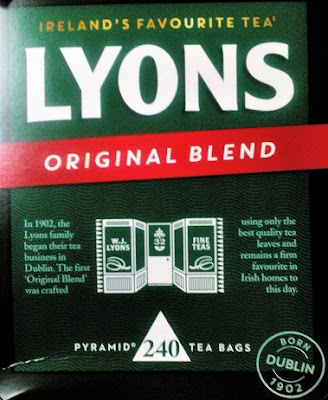 I sometimes enjoy green tea with lemon or one or two herbal 'teas,' but mostly, it's black tea with a splash of milk. When I was doing the knitting/crocheting group at the library, the librarian would always make tea and serve us tea and biscuits. When he'd ask one attendee how she liked her tea, she'd always reply, 'With a splash of milk and no sugar. I'm sweet enough already.' And so she was.

As we all know, on a damp, chilly autumn day (or any other day, really) nothing goes better with a nice hot cuppa than a book. Here are a few more from October.

Textile Folk Art by Anne Kelly
This is a new book that’s full of inspiration, beautiful photos of incredible work, and short pieces about various artists and their processes. I loved this book.

Ghost Stories by E.F. Benson
For the month that’s in it. The author is most well-known for his Mapp and Lucia books. As I recall, I tried the first of that series years ago and didn't care for it, so did not read much of the book before I set it aside. I enjoyed this collection, though. I came across it in the e-book section of the library website and decided to give it a try.

The Almost Perfect Christmas by Nina Stibbe
This is another one that I found in the e-book section of the library website. I read the author’s previous memoir earlier this year, I think. Bill found that one in a charity shop. I liked it, so when I came across this one, which is a series of life stories about the author’s funny Christmas experiences, I checked it out. It was funny and I found myself reading passages aloud to Bill. I had already learned that Fairytale of NY (by The Pogues) is a favourite Christmas song among Irish people. I’d never heard of it and had to look it up when I first heard of it the first year we were here. It is a horrible song. reading this book I discovered that it’s apparently popular in the UK as well, along with something called Merry Xmas Everybody by Slade. I looked that one up as well, listened to the first minute or so and closed the page. It is also suckage. While some of the music she talks about in the one chapter is awful, the book was a lot of fun, and I’m glad I came across it.

Murder in the Snow by Gladys Mitchell (originally published as Groaning Spinney)
When I first came across the few Gladys Mitchell titles in the e-book section of the library, this was among them. I saved it for last because part of the story takes place at Christmastime. It was available in mid-October, so I just borrowed it then rather than waiting until closer to december when it might be checked out. In this story, Mrs Bradley goes to visit her nephew and his new wife at their new home in the Cotswolds. She meets some of the local people and those who work on the estate as they come to spend Christmas and Boxing Day at the nephew’s home. Shortly thereafter, the snow starts to fall and the bodies do, too. Mrs Bradley investigates.

Whether it's chilly or warm where you are, I hope you're enjoying some peaceful moments with your beverage of choice (hot or cold) and some fun reading!
Share
Posted by Shari Burke at 2.11.18

I always love to hear what you are reading and your 'take' on the books.
I wish I could drink tea but the tannic acid just does me in. It is black coffee for me all the way. My grandfather was a tea drinker (he was from England) and I used to drink it a bit-but no longer.
I am glad you found a tea you really like and it must be good if it is Ireland's favorite. xo Diana

I wonder if I can find Lyons tea here in the states.
I am looking . . . sounds like “the twist” I need!