It's been a quiet day here. I like to meander through Sundays with nothing particular that needs to be done. I started a book--The Word Exchange, which I'm enjoying a lot so far--and spent a couple of hours doing some needle felting. I am almost done with a smaller piece that will include some cross-stitching when it's done and then I started a larger piece. I was stabbing that roving for two hours, most of that time on the larger piece. On that one, I just got a base strip made to the length I needed. There will be a lot more stabbing to come on this one, but I was pleased to have gotten a good beginning.

We had leftovers for supper, so heat and eat was the name of the game.

Before I get too far into the November book pile, here's the rest of the October book list:
Murder Underground by Mavis Doriel Hay
I discovered this book at the local charity shop. I’d never heard of the author, but learned by reading the back of the book that she was a Golden Age author. She only wrote three novels, all cosy mysteries, but authored or co-authored several books about rural England, with a particular focus on crafts. All three of her mysteries were published in the 1930s. This is the first one. The third is a Christmas-themed one, which I also have and will read soon. I’m curious to see if the tone is different. This one surprised me a bit, because it had a comedic element to it, starting with the name of the victim--Euphemia Pongleton. Miss Pongleton was found on the stairs of the Belsize Underground Station, having been strangled with her dog’s leash. This was not the station nearest the boarding house where she lived, but she walked there to save a penny on the fare. She is an unsympathetic character and, while people are disturbed at the fact of murder itself, no one misses Euphemia herself. Her nephew, Basil Pongleton, is the main suspect, because he is due to inherit and, of course, has money troubles. The police are confused because some things don;t add up and he makes things worse for himself by concocting stories about what he was doing, involving other people, then having difficulty remembering what he said and to whom. This was an enjoyable read.

Peace of Mind: Becoming Fully Present by Thich Nhat Hanh
In this book, Thich Nhat Hanh reminds readers that we spend a good deal of our everyday lives sleepwalking, moving through our days without being fully present. He provides various thoughts and examples of things we can do to become more present. I came across this while at the e-book section of the library website. If you've read or listened to Thich Nhat Hanh at all, you won't really find anything new here, but I find that revisiting ideas can sometimes spark a new thought or make me think of something in a new way, so I don't mind reading the work of certain people, even if I'm already familiar with it. Thich Nhat Hanh is one such person.

The Last September by Elizabeth Bowen
This book takes place in the waning days of the Anglo-Irish aristocracy during the Irish War of Independence in the early 1920s. The setting is a large house called Danielstown, which is modeled on the author’s childhood home, Bowen Court. The reader sees things through the eyes of Lois, who lives at Danielstown with her uncle, Sir Richard Naylor and his wife. She is 18, so coming of age in a changing world. The old ways are making way for a new, independent nation and there are tensions. Young British military men are frequent visitors to the country homes in the area and they bring their own sense of entitlement and arrogance to an already tense situation as they develop relationships with the people in the ‘big houses.’ One, Gerald, who is smitten with Lois, says at one point, “I mean, looking back in history – not that I’m intellectual – we do seem the only people.” This seemed to me to be a quiet book, with tensions simmering throughout, but also with some comical aspects in the form of the ridiculous behaviour exhibited by some of the Brits who are moving in the same social circles as the Anglo-Irish.

Spooky Stories by various authors
This came in one of the book-related emails I get--a small e-book of stories for Halloween. One was an excerpt from a newish book, once was specially written for this collection, I think, and not sure about the others.

I hope you're having a peaceful day, too. 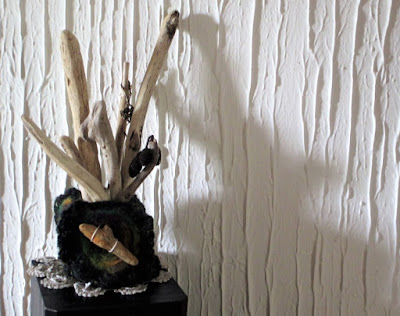