'I Thought You Were Dead:' This Morning's Greeting

We were up early this morning so we could catch the early bus to Donegal Town, where we would get a bus to Sligo, and from there to Ballina, Co Mayo. I woke up to see Bill's anxious face peering down at me while he was yelling, 'It's time to get up!' 'Why are you yelling?' I mumbled, 'What time is it?' 'I've been shouting your name over and over and you didn't move a muscle!' he yelled, 'I thought you were dead. It's 6 o'clock!' 'OK,' I said. I got up and stumbled to the bathroom thinking that 6 am is certainly no time to be awake, so of course I wasn't moving. Downstairs, he said he really was getting scared, but that I jerked awake when he touched me. I don't even remember that--just the look on his face as I opened my eyes. Poor guy.

Other than being up far too early, the journey was pleasant. It was still dark when we left the house--just light enough to see without a torch. There was a misty rain. The bus to Sligo was a bit late, but I was able to help someone with her bus questions as we waited. I commented on her crocheted hat and she said her mother made it. English wasn't her first language, so I watched her processing what I was saying and thought how I am often doing the same thing with Irish-English. There is usually a delay of a few seconds while my brain catches up and I smile vacantly.

We had plenty of time between buses in Sligo to have our coffee and eat our sandwiches. I wandered around and looked at some of the posters on the bulletin board. 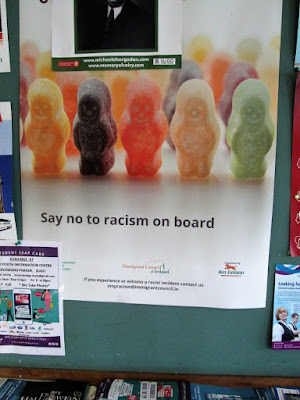 I've lost count of the number of times I've been in the Sligo bus station--we've been here a lot over the past few years--but I never noticed the old pay phone on the wall. Don't see many of these around anymore. 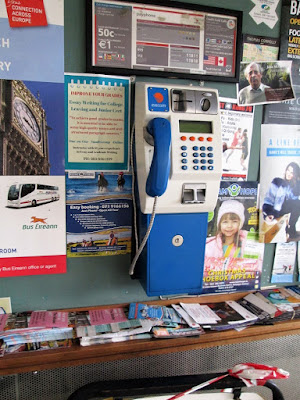 The journey from Sligo to Ballina was through new-to-us territory, but before we could be on our way, we had a bit of a delay.

There were about 6 or 7 of us getting on the bus at Sligo and we were all seated and ready to go, when one of the mechanics asked the driver to hit the brakes so he could look at the lights. After a minute or two of this, he told the driver we'd need a new bus, because there was a problem with the lights. So we waited for 5 or 10 minutes until another bus came, then we got off the one we were on, got on that one, settled in, and were immediately told the other bus was fixed now, so we could get back on that one. So we did. Then we were off. We stopped in town and the driver got off. He came back with another passenger (and her groceries) who was saying he's never been so late and the other driver from that other company said he was long gone. 'Oh, no, says I,' she said, 'This is Bus Eireann we're talking about!' She was happy to continue where she'd started, pontificating about various subjects apparently dear to her heart. At one point, she was talking about her dog, who eats two spuds daily with his tin of dog food. He likes spuds, but he does not like the smoke alarm going off when she makes toast. Someone wanted to sell her an €80 bag of dog food. She was having none of it. 'Sure, he'd sell ya a bucket of rain, that one.'

A few more people got on the bus before she got off in Easkey. One guy sat next to her, listened to her and then, when she got off, got up wand walked to a seat towards the back, shaking his head and chuckling. She was quite a character and I so enjoyed looking at the beautiful scenery and listening to her. She made us all laugh, whether or not that was her intention. Several more people got on as we got closer to Ballina and it was like a local bus--everyone knew one another and chatted.

The rain was coming down when we got off the bus in Ballina and we decided to go to the hotel to see if we could at least leave our backpacks there so they wouldn't get too wet. It had just gone half twelve and check in time wasn't until three. But the room was ready, so we checked in early.

We went out in the rain for a shortish walk to find the grocery store. Just as we turned the corner to get to the driveway leading to the car park, we spotted this fellow at the Ballina Heritage Costume Company. Guess we must be well into their busy season! 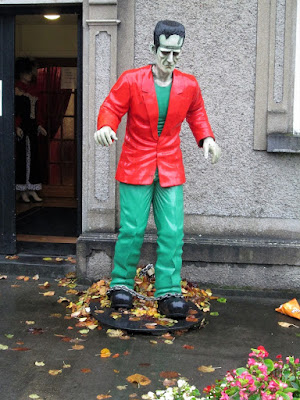 Tomorrow we'll explore the town. There are a couple of places we want to go, but other than that, we'll just meander around and see what we find!

It is strange to see a pay phone.
I can’t recall any in our area any more.
How enjoyable it must be to venture out by bus to see other places.
6:00 am is quite early though . . .
Poor Bill was worried about you . . ,