Last night, Bill switched on one of the lamps in the living room and the bulb blew. We have a light fixture that hangs from the ceiling, but it has multiple bulbs and it's both too bright and unnecessary for us to have several bulbs burning at once, so we almost never use it. This morning, we went off to get a new bulb. I hoped we would be able to find a compact fluorescent, but was prepared to have very little/no choice. It would not have surprised me to have to buy an old-style incandescent. In Moville, we had no choice but to buy an incandescent bulb for the lamp and we had to pay €5 for it. The only other option was to buy a ridiculous 200W (incandescent) bulb which was certainly not desirable or energy efficient! The only CFL bulb we found had a base that was too small for the lamp. So, I was quite pleased when we discovered LED bulbs in the shop here today. I can remember when I worked in a 'sustainable' goods store (where not everything was actually environmentally friendly or useful) and LED bulbs were the only kind of bulb the owner stocked. At the time, they cost $30 and up, depending on wattage. I was told that they would last 40 years or something like that. This was usually not convincing enough to convince people to buy them, but they were often interested in looking at them and finding out about them, since they were new at the time. We were chatting with the guy in the shop today about the fact that the price has come down quite a bit as we gave him the €5 euro for the bulb. I suspect it will not last 40 years, but that's OK. It's the most energy-efficient option, so I'm glad to be able to choose it and a little bit surprised that such a thing is available here in this small town!

Since we were just around the corner from the charity shop, we went in there and immediately headed for the book room, where I found a couple of happy surprises! 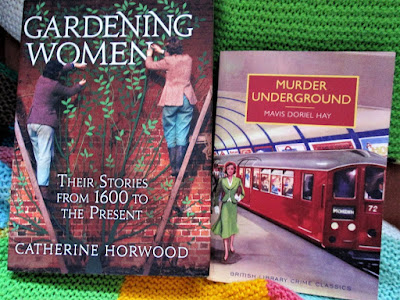 I'm intrigued by the women's stories about gardening. I'm quite interested in the history and experiences of women's labour, so I was happy to find this--it's a different angle than that taken in books I've read in the past. I've read a lot about women's domestic labour--cooking, making clothing, running a household, parenting--but never about gardening, so this will be new to me!

I had not heard of the other author--Mavis Doriel Hay--but I discovered from reading the back of the book that she was a writer in the 'golden age of crime writing' category, so I brought the book home. I enjoy the writing of the women who wrote during that era and I was thrilled to find a new-to-me author! She only wrote three detective stories, all published in the 1930s and re-issued a few years ago by the British Crime Classics Library. I googled her when we got home and learned that the one I got was the first of her books and the third and last is a Christmas themed one. Bill looked that one up and found a copy at an indie bookstore in the UK, so that one will be on its way to me shortly. I also found out that she was really interested in rural village life in the UK and, under her married name of Mavis Fitzrandolph, and sometimes in collaboration with others, she wrote books about that subject. Her primary interest was in rural handicrafts, especially quilting. I'm so glad that I discovered her today!

This is one reason I love poking around the shelves and piles of books in charity shops. We haven't had any used/indie bookshops in the small villages we've lived in, but the charity shops always have lots and lots of books--this is certainly a nation of readers!--and we've found some gems. As a bonus, when we pay for them, we know the money is going to various good causes. Sometimes we find books we plan to keep and sometimes we know we will read them and pass them on, donate them back to the charity shop, or put them in a wee free library. It's all good.

I hope you experience some happy surprises today, too!
Share
Posted by Shari Burke at 12.9.18

Love reading about your “surprise findings!”
Great fun . . . isn’t it!
My Mister Irish will enjoy the LED story . . .

Light bulbs shopping drives me crazy. We have way too many choices here and none of them are cheap options. I really like a three way wattage bulb that I can turn on low for ambient lighting or turn on high for close up work.

Like you, I love finding a new author. Hope you have a great rest of the week- xo Diana