On we go into a new month! Yay!

Here's a continuation of the July book list, the first part of which can be found here.

Days of Awe by A. M. Homes
The newly published collection of short stories by this author, who also wrote May We Be Forgiven. I loved this book, even though I had to just stop and sit for a while after one or two of the stories. One set of characters appears in two of the stories set years apart. The author happened to be on BBC Radio 4‘s Open Book a few weeks ago, and during that interview, she mentioned that the same characters had appeared in previous short story collections.

Cowslips and Chainies by Elaine Crowley
A memoir recounting the experiences of the author growing up poor in 1930s Dublin. One of the reviews set this work against the books of Alice Taylor, who also writes about her life in Ireland, but in a rural setting and in a tone that is much more idyllic. In Crowley’s book, written in a very straighforward way, we see great cruelty and hardship, but also great acts of kindness and solidarity, joy and pain, and hard lessons learned.

Coming Home: One Man’s Return to the Irish Language by Michael McCaughan
I found this book on the shelf at the Donegal Town library one day. I loved it! The author is an Irishman who has been a journalist in South America and has learned to get by in some languages and communicate well in others (besides Englsh). Like almost all Irish children, he had compulsory Irish language classes as a boy, but, like most of them, he did not learn much Irish in them. Irish and English are the two official languages of the country. Most people are not fluent in Irish. He decided one day that he wanted to become so, and he set out to learn, even though at that point, he was still spending most of his time in South America. He began listening to the the RTE Irish language radio station via the internet. This was useful to him, but he started pretty specifically--he realized that the obituaries on the radio came on at the same time every day and used the same words every day, so he listened to those at first. The author talks about his own difficulties learning Irish, the ways he learned and attitudes towards the language and language learning, among the general public and in classes. There are many ways in which the Irish language issues remind me of various issues around language in other places, especially things I observed while studying and working with Inupiaq Eskimo. The author has some good insights. At one point, he says that to speak Irish in Ireland is to be treated as a second class citizen and reflects on why that might be so:

‘We are a colonised people, a condition that outlasted the declaration of the Free State in 1921. We have two governments on this island, a direct consequence of occupation and plantation. One can agree or disagree with existing arrangements, but one cannot deny the reality of a divided country which carries with it the imprint of a brutal past and the legacy of a post-colonial mindset. This condition is buried deep within and emerges in strange ways.’ (p 253-254)

I think he’s right about the fact that the history as a colonized country still has an impact on cultural attitudes today. It was pretty clear to me quite soon after we arrived, that living in a country that was, historically, a colonized country that gained independence less than a century ago would be different than living in a country that was a colonizer, and was built on genocide, land grabs, and slavery. As an aside, it has been interesting for me to discover how much more comfortable I feel being here than I ever did in the country in which I was born and I think that this history has something to do with that. The author goes on to say:

‘The Celtic Tiger era, for all its wealth and sham, brought a new conviction to the Irish people with regard to their country and its language. the blighted langauge of hunger and poverty became, in the minds of many people, the language of plenty, sparking renewed interest.’ (p 256)

This book would be a great read for anyone interested in language preservation and language learning.

The Shelter of Neighbours by Eilis Ni Dhuibhne
A collection of short stories by this Irish author. The stories are set in Ireland and many involve different people/families living in a particular street. I came across the book in the e-book section of the library and enjoyed it a lot.

May this new month be full of good reads, creative endeavors, and moments of quiet joy. 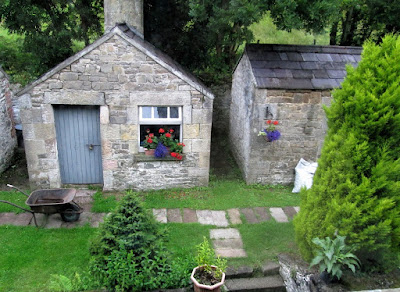 August a hot hot month here-fall on the way and the brilliant colors-having moved to Indiana with weeks in Florida-will be my first autumn here! Your books are great details suggestions and will look into them! Your blog is so interesting and love reading it!!!