Down the Old Road

We were riding to Donegal Town today and pulled off into what is now a quiet lane. In a field by the main road are the replica beehive huts that Killybegs is named for. 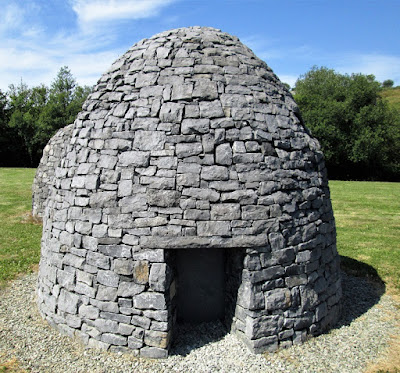 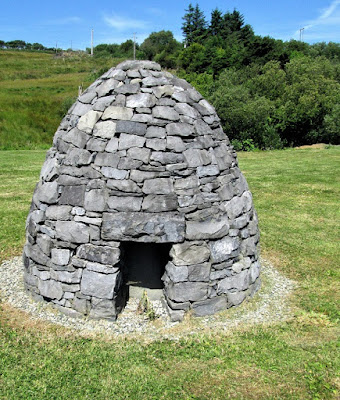 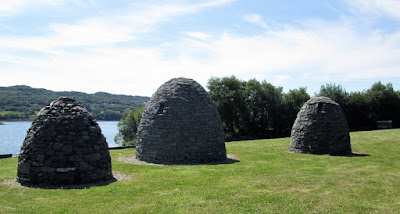 In Irish, the town was called, 'Na Cealla Beaga' which means 'the small cells.' Structures like those in the photos were built by the monks who used to live in the area. They sit in this field alongside the main road into town. 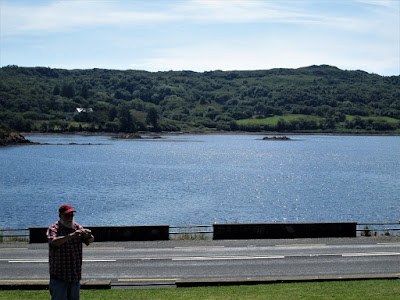 The causeway is the newer road and the lane we rode down used to be part of the old Donegal Road. It curved around over a stone bridge with only a couple of houses at either end that are inhabited. In between those homes was this abandoned cottage and the old tree behind it. 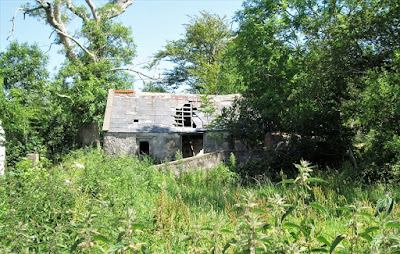 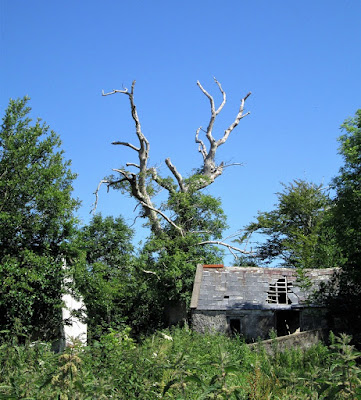 After our little detour, we were on our wy to Donegal Town, where we stopped at the library. We had books in and I had a problem. A couple of weeks ago when we were there, I had my address changed. The woman had some difficulty with the computer program and it took a few tries, but she got it done. Later on, after I got home, I discovered that I could not sign in. I narrowed down the problem to either my name or my card number and assumed it had something to do with the problems she had. We were going to go last week, but it was too hot, so I've been a couple of weeks now with no access to my account. I was going through library withdrawal.

There was a different woman there today and it was almost time for her lunch break, but when I explained the problem, she scanned my card and said, 'Oh, there's your problem. Your card has expired. That should've been renewed.' I figured that wasn't actually it, because Bill had no trouble accessing his account and his card needed renewing as well. Then she opened a page and said, 'Ah there's no name.' And there it was. In the space for my name, it said, 'Killybegs.' The books that I had in had my card number on the slip of paper and 'Killybegs' where they usually put the name. When we sign in, we are supposed to put our last name first. When that didn't work, I'd tried my first name first, to no avail. Had I tried Killybegs, I guess it would have worked. Bill started calling me Killy. Anyway, it's fixed now. I tried it when I got home--had to check on the progress of my other holds!

So now I have a fresh library pile, some others in the queue, and the ability to add to the list. Not sure yet what I will read first from my library pile, but here is the end of the June book list.
Doves by Lachlan MacKinnon
A collection of poems by a Scottish poet.

Neutrino by Frank Close
This book is an account of how the neutrino was discovered. I heard the author being interviewed on a podcast of The Life Scientific recently and found him to be a good communicator, so I went to the library website and looked him up. I requested this book and another. The book is written for a lay reader, but there is a bit of physics in there as he describes what is going on and what the scientists were finding at each step of the way. I am sure that I did not fully grasp all the nuances--it is hard to wrap my mind around tiny sub- atomic particles, antimatter, and other aspects of quantum physics. However, there were a couple of moments as I was reading when I simply stopped reading and sat there with goosebumps as I thought about the kind of things he was talking about. I also found the story of the process of discovery fascinating. He's a good writer, too, as well as being a physicist.

Friends and Relations by Elizabeth Bowen
Edward and Laurel are getting married. Laurel’s sister, Janet, marries Rodney soon after. Rodney is the nephew of the man Edward’s mother ran away with when he was a small child. The relationship did not last. Edward has never really comes to grips with the breakdown of his parents’ relationship. Lewis is Edward’s friend and seems to hang around everyone a lot. There are also some other related characters moving in and out of the story. I found this to be a strange book. It was not bad or unenjoyable, but the way it was written was a bit weird, I thought. I came across it when I was looking at the Irish authors e-book section of the library website. I have not read much Elizabeth Bowen and I thought I’d check it out. It was not what I expected based on the description.

On Balance by Sinead Morrissey
Poems by Northern Ireland poet. I really liked this collection, so I went and found another of her books and borrowed that.

I hope you are having a pleasant day, wherever you find yourself.