We went to Donegal Town today with the primary purpose of visiting the library. We both had stuff to return and stuff to pick up. We'd planned to take the 9 o'clock Local Link bus, but we didn't get up in time, so the 11:45 Bus Eireann it was. It still amazes me that so many small villages have such good bus service. We have more options here than we did in Moville and more than we did since the last time we lived here, as there are more buses going between here and Donegal Town, in addition to the Letterkenny service. I suppose the travel pass goes a long way toward making these rural services possible. Every Irish person gets a free travel pass when they turn 66 and it's also possible for people with disabilities or low incomes to get one. I think it's common across rural areas, but it was really noticeable in Inishowen, how much of a social thing that travel pass is. People use their passes to take the bus for practical stuff like grocery shopping and getting to medical appointments, but they also use it to just ride somewhere and have a bit of the craic (have a good time) with their friends. We learned to expect a whole group of older woman to get on the bus at Carndonagh and start laughing uproariously while engaging in some banter with the bus driver, who gave as good as he got. Things are less raucous at this end of Donegal, but the socializing goes on just the same. Today, a young guy got on out in the middle of nowhere and sat down by an elderly gent who'd gotten on in one of the villages. They chatted away the whole time.

Donegal Town was a madhouse. Once we got to the outskirts of town, everything slowed right down and it took at least 10 minutes to crawl to the bus stop. Traffic was backed up in the other direction, too. Then we got off the bus and I was surprised at how many people there were in The Diamond and just milling about. After walking a bit, we went back to The Diamond to sit and eat our lunch, and we discovered that there was a concert going on, so that was a happy surprise. 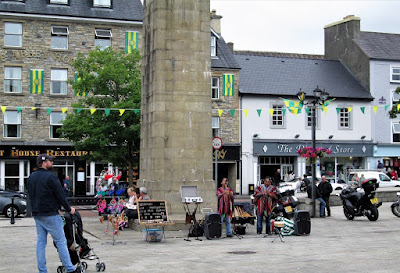 The music had a Native American sound which reminded me of Carlos Nakai. It was really nice.

After lunch, we went over to the library and that was as crowded as I've ever seen it. We looked at the shelves and each of us found something unexpected to bring home, along with the holds that had come in, so that was nice.

Then we walked around some more. Bill pointed out this very striking flower. 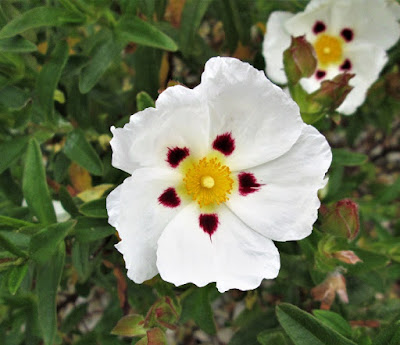 No idea what it is, but it is beautiful!

It is definitely tourist season. I read that staycations are more popular in Ireland this year, due to the weather and I guess that both in the Republic and Northern Ireland, now is the time many people take their holidays. It's also a difficult time in Northern Ireland just now. July 12 is a sectarian celebration there and violence and mayhem increase on the night of the 11th and in the days around it, so many people leave, if they can. We did see lots of Northern Ireland cars, but there are always some around anyway.

Not all the tourists were from Ireland, though.


It's common to hear many different languages being spoken in Donegal Town, but as you'd expect, there are more people from elsewhere around now.

The water was quite calm.
This guy was in a hurry--suddenly he revved up the raft and zoomed by. 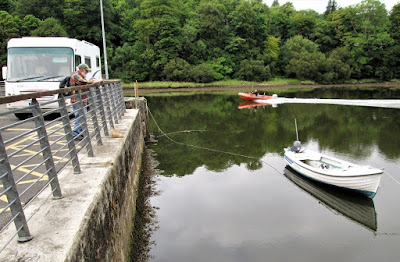 Seconds later, he was gone, leaving only his wake. 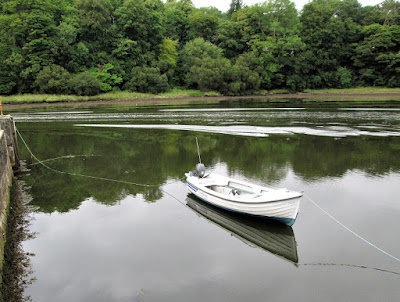 Shortly after that, we were gone, too and on our way home. It was a pleasant day with some happy surprises. may you also have some of those as you go through this day.
Share
Posted by Shari Burke at 12.7.18