Lemon Meringue Cupcakes at the Market

On Saturday, we went to a market in a village hall near Donegal Town. It's held every other week and it happened to be going on while we were down that way. It was pretty cool. There were a few knitted items for sale, some produce, homemade jams, marmalade, and lemon curd, eggs, and meats all produced in the area. There were also home baked goodies of various kinds, including lemon meringue cupcakes. We all thought that was an interesting idea. I've only had meringue on top of lemon pie and baked Alaska and to be honest, I don't think I understand the appeal. Meringue is quite popular here, though, and it can be found packaged in the shops. Unfortunately, I did not think about taking a photo of the cupcakes until after they'd been eaten, but I can say that they were really good! It was just a sponge cupcake with some scooped out to make a place for a dollop of lemon curd. I suspect the meringues were made separately and then stuck on top, but maybe not.

In addition to the baked goods, there was other food on offer and of course, endless cups of tea. I thought I might float out of the village hall! 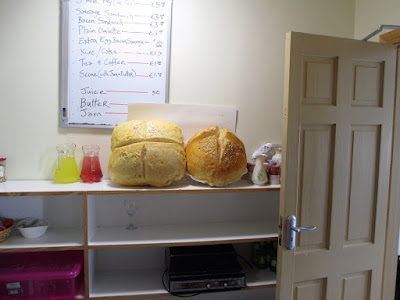 They offered something called the '5 mile fry' which was an Irish breakfast in which the ingredients all came from within 5 miles. A few people around us had this and it was quite a substantial amount of food! Our daughter and I had a plain omelette, which had cheese in it and was made with local eggs. It was served with some potato farls and a piece of soda bread. Simple, but delicious! Bill had a sausage sandwich, made with local sausage and what looked like sourdough bread. I tried a small piece of the sausage and it was quite good. Our friend had a fried egg on potato farls and he quite liked it.

It was fun to see all of the people coming together in the village hall and chatting with each other. Seems like a great idea for an ongoing community event. Long may it continue! 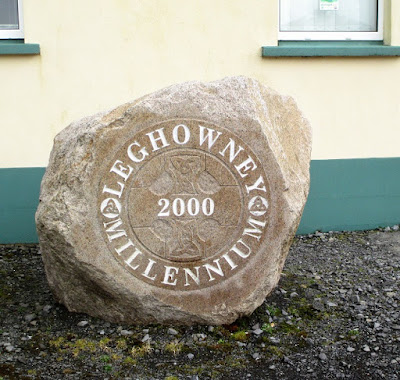