A Wonderful Cup of Tea and a Completed Commission

Yesterday morning, I went outside for a while and re-potted some plants. Then we went to get fruit and veg from veg man. Unsurprisingly, by early afternoon, my head was clogged and I had a scratchy throat. I considered taking a Benadryl, but decided to just wait it out. I should have taken it then, because this morning I woke up with drippy nose and eyes and a funky stomach. I had my porridge and coffee and sat quietly on the couch, eyes closed, with a blanket on my lap and a shawl around myself, shivering, as I do when allergies attack. After a while, I took that Benadryl and continued to sit until I felt like a cup of tea. It was just plain old regular tea with a splash of milk, but it was wonderful! As I swallowed the first sip, I felt goosebumps rising on my arms and legs. I really enjoyed that cup of tea! And after a while, I felt myself warming up--a sure sign that things were settling back to normal. By then I could keep my eyes open, so I picked up the hat I was commissioned to make and completed the knitting. We went to the shop to pick up a few groceries, after which I made another cup of tea and settled in to weave in ends. Then I delivered it. 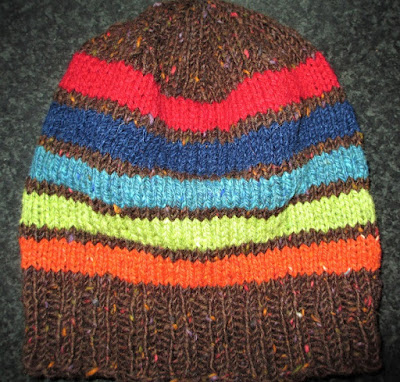 I was quite pleased with it. The person buying it was very happy. And Bill asked if he could have a similar one.

The hat is made with leftovers from other projects. The person it's for came over to choose colours and asked for stripes, so that's what he got. I think these colours came together well. I'll have a rummage in the scrap bag and start Bill's soon. For now, I am happy to be feeling almost normal again, if a bit tired. I expect my second wind will show up around midnight, as it usually does.

I hope you're having a wonderful day in your neck of the woods!
Share
Posted by Shari Burke at 21.3.18