Here's part two of the January book lists. Links to lists from previous months and blog posts about individual books can be found at the books page.

Blood Lines: Short and Long Stories by Ruth Rendell
This is a collection of stories, including one novella. I like Ruth Rendell and it seems she is popular in Ireland, since we’ve collected a decent collection of her books from various charity shops.

Murder in My Backyard by Ann Cleeves
Having completed the Palmer-Jones series, I decided to check out another series by the same author. These books were published around the same time as the Palmer-Jones series and are also out of print, except for the e-books. These feature Inspector Ramsey, who, in this first book, is moving into a cottage that is located in a small Northumbrian village, having been divorced from his wife. He has faced some difficulty in that village before, but we don’t learn what it was--maybe in a later book.
In this book, a developer has tricked an older woman, Alice, into selling him some land that he wants to build posh houses on. People in the village are angry. Alice tries to get the developer to agree to sell the land back to her. He refuses. She stops at the local pub after their discussion and then heads for home. She doesn’t make it. In the course of the investigation, secrets are revealed, relationships tested, and corruption discovered.

A Lesson in Dying by Ann Cleeves
Turns out that THIS is actually the first one in the Inspector Ramsay series, not the one above. The difficulties he faced that were mentioned in that book, which I read thinking it was the first (it was actually the second) are what make up the storyline of this book. The head teacher at the local school is hated by everyone, so no one is really bothered when he ends up dead on the night of the Hallowe’en party. His wife is especially untroubled, except that she is the suspect and is quickly arrested. One person in particular is convinced of her innocence and starts investigating with the intent to prove it. Things go on from there.

The Art of Fiction by David Lodge
This is not a book about how to write fiction, but is a collection of the author’s (revised and expanded) newspaper columns about various aspects of fiction, using the work of several authors as examples. The original versions of these appeared in The Independent on Sunday and the Washington Post. His ‘sections’ as he calls them are each about some aspect of the novel. These range widely and include such things as magical realism, the uses of the telephone in fiction, endings, chapters, the uncanny, and many more. Each section begins with a quote from a novel, which he then usues to illustrate and explain the topic he is writing about. He draws on work ranging from the 1700s to the 1980s. I’d picked this book up and started it a couple of years ago and ended up putting it back on the shelf. I considered passing it on to the charity shop, but decided to keep it. When I picked it up this time, I was either going to read it or get rid of it. This must’ve been the right moment, because I quite enjoyed it this time and am glad I kept it. Now that I’ve read and liked it, it will go to either the wee free library or a charity shop.

Stitch Stories: Personal Places, Spaces, and Traces in Textile Art by Cas Holmes
I loved this book! In the first place, the covers are fabric of a slightly fuzzy kind, so it is a nice book to hold. I wasn’t sure what to expect when I requested the book, but decided that even if it was mostly description and instruction for techniques I would never be interested in trying, the pictures would be fun to look at. I was happily surprised. The pictures are indeed fun to look at and I had a wonderful time looking at the work collected in this book. There was a little bit of technique in the book that I skipped past, since none of it involved anything I wanted to do. In spite of that, I thoroughly enjoyed the author’s descriptions of how she works and her short presentations of the work of various other artists in words and pictures. I love reading about people’s creative processes and this book is full of that. My favourite chapter, of course, was the one on hand stitching. As a hand stitcher myself, and one who uses repurposed materials as much as possible, I was quite taken with the thoughts of other people who work the same way and of the descriptions of traditional methods of hand stitching repurposed fabrics to mend clothing and household items. I also made good use of the bibliography and requested a couple more books from the library. 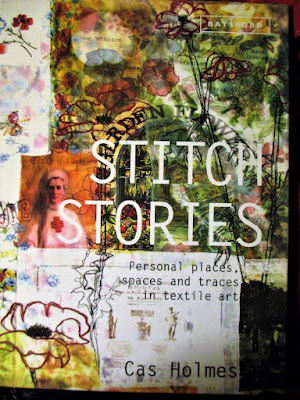 I would love to just hold that last book. lol

Have you read Maeve Binchy? I found her books to be an easy read and usually a good story. I was sorry when she died as I thought she was quite a lovely person.

I am finishing Camino Island by Grisham tonight and then will put off another book for a while as I work in a new business with my son.

Have a great night- xo Diana