Lost and Found at the Library

Wednesday was full of cold, rain, sleet, hail, snow--and even thunder and lightning. Our librarian, Gerard, was stuck at home and unable to get to work, due to the ice, so someone else came in to sub for him. During the afternoon, I saw that I had a CD in, but since neither Bill nor I wanted to ramble around on icy footpaths, we opted to stay in and leave our stuff there until today.

This morning it was still cold but the footpaths were wet, not icy. Off we went to the library and then to the shop to get some groceries before the next bit of snow/ice showed up. Gerard was in today and when he went to check out the CD for me, he opened the case and discovered that it was empty! He was surprised, because he said things are usually checked before they are sent out. He apologised. I told him it was no big deal. We chatted about music with another library user, who was asking me about Karl Jenkins--he'd been in the library one day when I was there picking up a couple of his CDs and remembered. I told him I highly recommended The Armed Man and Peacemakers. Requiem is quite good, too.

Later on, we saw that we had more stuff in, so Bill went to pick it up. When he returned, he handed me the CD. Turns out that the woman who took over for Gerard on Wednesday stuck it into the boombox to listen to it and then forgot to take it out, so it was there all along. 😉 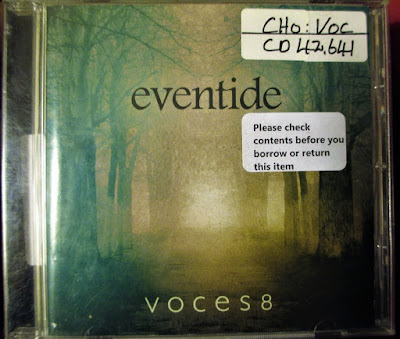 I haven't listened to it yet, so have no idea what it's like. Now I know what I'll be listening to later while I'm crocheting.

Thanks for sharing about Voces8. I've spent the last few minutes listening to their videos. Very enjoyable. I know you will enjoy the lost/now found cd!