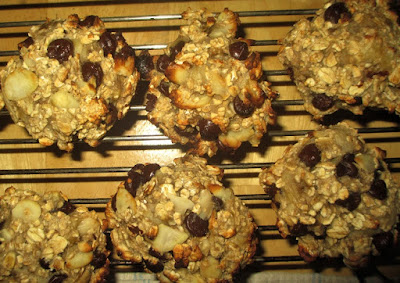 I happened to scroll past one of those videos that just automatically plays and I caught the caption saying the woman was making 3 ingredient banana oat cookies. It looked like she was needlessly making more work for herself by 'blitzing' oats into flour, but maybe she was trying to sell the blitzing machine. I didn't keep watching long enough to find out. I googled '3 ingredient banana cookies' and a whole bunch of blog posts with recipes showed up. There were slight variations between them, but all the same idea. Some people used raisins and some chocolate chips. The amount of oats varied from a cup to 1 3/4 cups of oats. I suspect this will vary anyway, depending on the bananas.

They sounded so good and so quick and I can see how useful they would be as dessert, portable snack or even an on-the-go meal, since they are healthy (healthier with raisins than chocolate chips, I know, but I had none of the former and enough of the latter). I whipped up my first, but definitely not my last, batch of these. I don't think they will last long.

As I mentioned, there are recipes all over the place for these, but here it is again:
3-Ingredient Banana Oat Cookies
Preheat oven to 375F/190C
Either grease or line a baking tray with parchment paper

Mash two large ripe bananas very well. Mine were not as soft as they might have been, but it didn;t matter--I just mashed quite well.
Add between 1 and 1 1/2 cups oats--I used half a cup of jumbo porridge oats (old fashioned oats in the US) and half a cup of regular porridge oats (quick cooking oats in US) and then added a bit more of the latter--and mix in well. I just kept on mashing with the fork until they were well incorporated.

Mix in chocolate chips, raisins or other dried fruits, or nuts of your choice. Coconut would probably be good, too and you could mix and match the add-ins. I think some cinnamon would be good, too.

This time I dumped in some mini-chocolate chips and flaked/sliced almonds.

Bake for 10-12 minutes. Let sit for a minute and then remove from baking tray and cool on rack.

I'll try a different variation next time. Glad I came across the idea. It's clearly not a new one, but I'd not seen it before
Share
Posted by Shari Burke at 10.1.18

You have to be kidding me!!! I am going to try these! Thanks for the recipe! Diana

They look tasty. We always have plenty of bananas on hand.