We had a package of smoked salmon in the fridge that didn't get eaten last week and I decided to use it in a pan of potatoes au gratin. 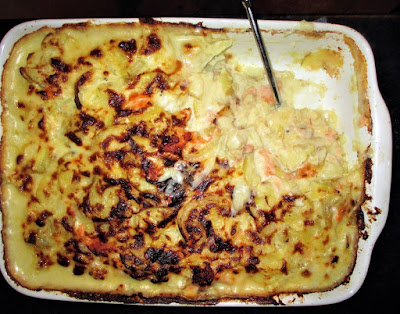 Of course I made a big pan so there would be leftovers and I'm glad I did--these are so, so good! 😋

I used the grater/slicer thing I picked up in a charity shop earlier in the year to very thinly slice the potatoes. 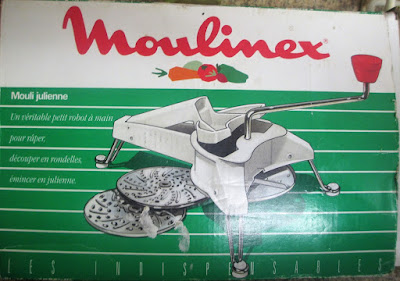 I put them in a pot, covered with water, and cooked them until they were almost done, but still al dente. Meanwhile, I sliced a couple of onions and cut up the contents of a 300gram package of smoked salmon. The drained potatoes, sliced onion, and salmon went into the baking dish. I made a cheese sauce with lots of black pepper and some granulated garlic and poured it on top of the potato mixture before stirring well to make sure the sauce was well incorporated and everything was coated. Into the 190-ish degree fan oven it went and stayed there for about 25 minutes.

I'm so glad I found this tool in the charity shop--it was during the first few days of January that I found it, along with my bread machine and a pile of books, and paid 7 euro for the lot. It just so happened that the woman who brought the kitchen stuff in was volunteering that day and she said she'd been doing a clear out. As I recall, the shop was jam-packed with newly donated stuff that day. I made a mental note that the first few days of the year are probably a good time to pop in and see what people have gotten rid of. I can't think of anything I need, but a year ago I would not have even thought of that tool. Once I spotted it, though, I made a beeline for it--I had a metal one years ago and used it until it broke. It's very handy.

As we speed towards the end of another year, I hope all is well in your world!
Share
Posted by Shari Burke at 30.12.17