For several months, I have been jumping around a bit with my stitching. I had several projects started, but throughout the summer, I would often feel restless and at times, none of the started projects were things I felt like working on at a particular time. Some other stuff had to be set aside because it was too uncomfortable to have on my lap, even when I wanted to work on it. I always have different projects using different techniques in progress because that way I can move from one set of hand/wrist/arm movements to another and not end up in pain. This was beyond my usual way of working though. It started to bug me, actually, but it was summer and in addition to my usual difficulties with the season, I also had the pain and the aftereffects from the fall I took a couple of months ago, so I tried not to think about it too much and decided it'd all get dealt with eventually. I did whatever worked to distract me--if I felt like crocheting, I did. Knitting, tatting, crocheting, bit of sewing or cross stitch--whatever I felt like doing on a given day, that's what I did. I completed some smaller projects, but some larger ones just sat in a pile.

Now summer is officially over (I cannot express how thrilled I am by this!), and I am feeling better. The pain has dwindled to a little bit of discomfort that is not even noticeable at times. While it is not as cool as I wish it was, and I am still eagerly awaiting the day when I can close the windows, it is far more pleasant than it was. I am able to work on things that sit on my lap and last weekend, I finished my swoncho (sort of like a sweater-poncho combination). Last night, I finished a poncho I'd started a few months ago. 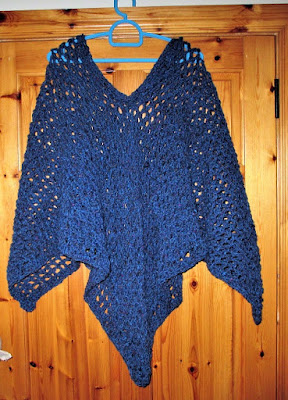 I went around and around for a long time, deciding how to use this yarn. I've had it for a couple of years, since I walked into the charity shop in Killybegs one afternoon and spotted it--two large hanks of Donegal tweed in a beautiful blue with specks of purple. I made a beeline for it, as you do. The hanks were large, but there were only two of them, so I knew I would not be able to make a sweater, for example. I considered smaller projects--hats, cowls, other accessories--but I already have a hat in a very similar, though thinner, Donegal tweed. I also have a big blue cowl. The yarn was a little bit thick and thin and not something that would wear well for anything like mittens or socks. In the end, I decided to try a poncho. I started knitting it on big needles and it just wasn't working for me. I decided to use a big crochet hook (8mm) and use my go-to stitch combo for when I want to stretch the yarn--the net stitch with ch3 spaces. 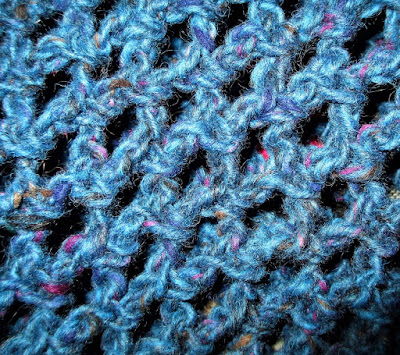 I made two triangles of the same size and then joined them, leaving a neck opening. I started each triangle at the bottom point and worked up, increasing at the beginning and end of each row. I crocheted 1 round around the outside of each triangle and two rounds around the neck opening. I have a couple of small scrap balls of yarn left, so this approach worked well for stretching the yarn as far as it would go--yay!

I still have a few more large projects and a couple of smaller ones in progress. Two of the big projects have been ongoing for a while and I know they will not be finished anytime soon. They're large tatted pieces and tatting is not a fast process. I also have a big hand sewing project that will not be done quickly. I don't mind this, since I do like having some projects ongoing that I can easily pick up and put down as the mood strikes. I have a bunch of ideas and plans for new projects, but I am going to try to complete the blanket I am working on, the second sock that is on the needles, and the second crocheted arm warmer to match the one that is upstairs by my bed, before I start anything new. We'll see how that goes! In the meantime, I eagerly await a bit of cooler weather, so I can start wearing more yarny stuff!!
Share
Posted by Shari Burke at 23.9.17