It's cloudy today with a nice breeze. It actually feels a little cool. I am so grateful--and not only for selfish reasons this time! We had below average rainfall in April and that has continued into May, which has, so far, been sunny and warm (or hot depending on your perspective). Often there has not been a cloud in the sky. This is not normal. For a couple of weeks, it has been warmth, sun, and blue skies out there. Before that it was not so warm, but still dry. The soil needs moisture. Gorse and forest fires are burning. We are being asked to conserve water--not what you'd expect in Ireland! We might get some showers over the next few days. They would be welcome, but may not be enough to get things back to normal. Personally, I am in favour of a good, long, hard, soaking rain. I live in hope.

We went to Buncrana yesterday and it was too hot and there was not enough of a breeze, but the bus ride was pleasant. Another passenger was chatting with the bus driver and they were talking about the good old days. It was fun to listen to them and look out the window at the scenery and the many sheep, lambs, cows, and calves in field after field.

I've decided to give up on the book I was reading--1Q84 by Haruki Murakami. I'd requested it after I read a blurb about it in an Off  the Shelf email. I hesitated because it is not the kind of thing I normally read, but it sounded intriguing, so I figured I might as well give it a chance. I requested the complete trilogy, so all three books were in one. When I started it on Sunday, I was a little surprised to find myself immediately drawn into the story. I settled down and whipped through a couple hundred pages. The next day, I read another couple hundred pages, but was starting to be annoyed with the repetition of certain things. The chapters alternated between a woman named Aomame and a guy named Tengo. She had some body image issues and he had a traumatic memory--and both were discussed in endless detail in almost every chapter. This did not seem to be necessary for the unfolding of the story. I tried to give the author the benefit of the doubt. The book was written in Japanese and translated into English and I read in a review that the translation was not that great, so I suppose it could have been down to that. But whatever the reason, by yesterday morning, as I completed Book 1, I realised I was so annoyed that I really did not want to wade through another 900 pages, reading over and over again about Aomame's dissatisfaction with her body and Tengo's traumatic memory. I looked online and read a summary of the book, so I know how it ended and was able to spare myself further annoyance. The book is on the return pile and will be going back to the library today. Last night, I started a new book. So far, so good.

We had to go water the garden this morning. Another woman came to work on her beds while we were there. She brought cauliflower plants that she started from seed. She said she has way too many plants, so she brought them to the garden to share. I was thrilled because I have twice planted cauliflower seeds with no result. I planted one of her plants and she seemed happy that someone took one. She says she has plenty more--I should've asked her where she got her seeds! I watered our stuff and gave the children's bed a drink while I was at it. I picked some herbs and pulled some baby radishes.

On the way, we walked by this slope that is by the sidewalk around the corner from us. At some point, someone planted a bunch of flowers there and they mix with the wildflowers. There are some new flowers blooming now. I wonder what this is: 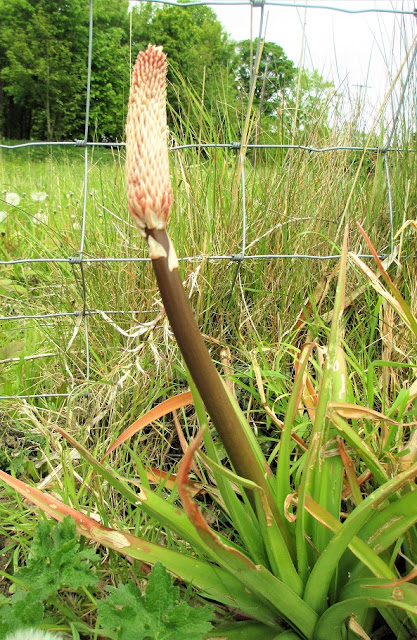 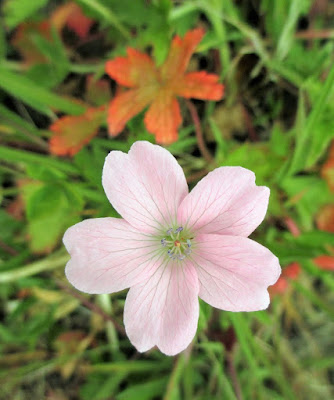 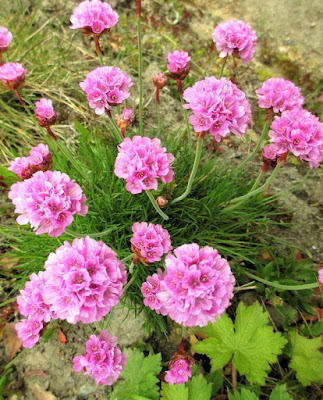 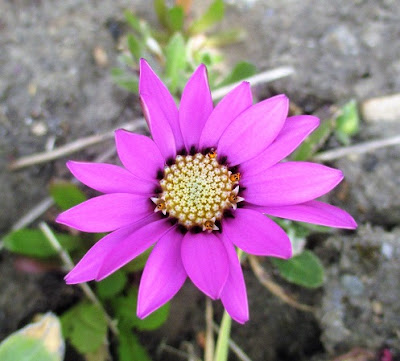 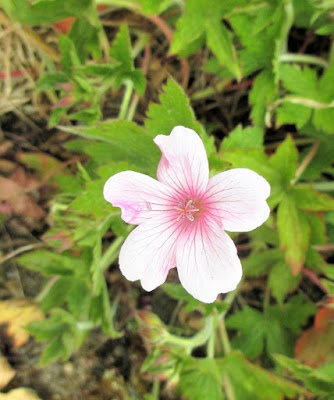 I hope you come across lots of beautiful things in your part of the world as you go through your day!
Share
Posted by Shari Burke at 10.5.17