We had a quiet day today. I slept until 10, had some breakfast, then sat on my couch, drank cups of coffee and tea, and read a book--Judgement in Stone by Ruth Rendell. I found a download of a BBC Book Club discussion about the book, so now that I've read it, I will listen to that later. Bill started a book he picked up at the library yesterday--Ray Bradbury's short stories. He is not keen on it so far and is not sure whether he will continue.

I'd decided to make a frittata for supper. I used a big pan so there would be leftovers. 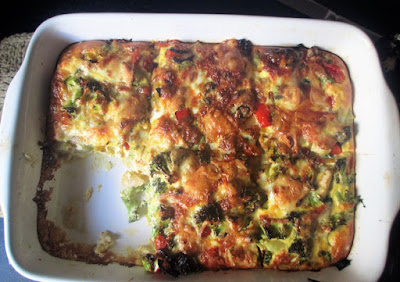 I buttered the baking dish and put in cubed, cooked potatoes, some sauteed broccoli, garlic, chopped red bell pepper and onions, some cheese (a cheddar/mozzarella mix and some smoked) and black pepper. Then I beat 10 eggs and some milk, and poured it over the top. I baked it for about 20 minutes at 180C in my fan oven. Had a square with an apple and the rest is n the fridge. 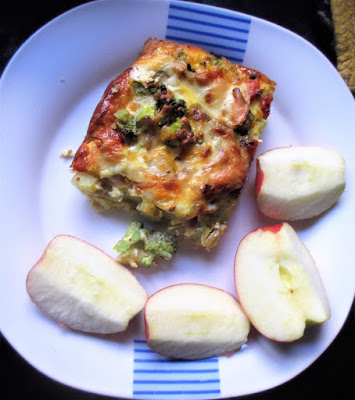 I also made some stuffed cheese rolls. I made pizza last night and used the bread maker to make the wholemeal pizza crust dough. As I always do, I made a large batch, even though I did not need it all for the crust.

I cut off what I need and put the rest in a container in the refrigerator. The next day I take it out and let it sit for a while before rolling it out and cutting it into pieces. I add cheese and whatever else to half of each piece, and then fold over and seal the edges. They are never the same when I make them. Today I kneaded some shredded cheddar/mozzarella into the dough before rolling it out. Then I added some emmental cheese and chopped some scallions on top before folding, sealing, and baking. It has just occurred to me that I should have spread some Dijon mustard on the dough before I put the cheese on--that would have been good! Oh well. Now I have a plan for next time 😋 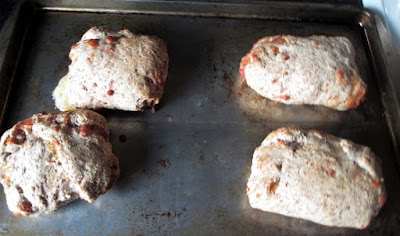 I have a couple of these left too, and they will heat up nicely tomorrow.

We move our clocks forward tonight--that always bums me out. But I have nowhere I have to be tomorrow and no timetable, so I will get up when I want and meander through my day. At least supper is already taken care of!

I am hungry now!

It's good--and so versatile. The leftovers are handy, too--can eat cold or heated up!