I had stuff I'd planned to do on Saturday, but when I went down with a migraine, nothing got done. Yesterday was catch-up day.

I spent a couple of hours in the kitchen. I made some muffins using the same basic recipe as these lemon poppyseed muffins that I made last week, but this time I left out the poppyseeds, used about 1/2 a teaspoon of vanilla extract instead of lemon, and used ground up walnuts instead of sliced almonds. I baked the muffins first, then turned up the oven to 200 and stuck in a pan of cauliflower. I'd chopped a head into small bits, tossed them with olive oil and sprinkled with garlic granules, black pepper, oregano, and a bit of chili powder. When they were tender and a bit browned, I sprinkled Parmesan cheese over the top and stuck the pan back into the oven for a little while longer. 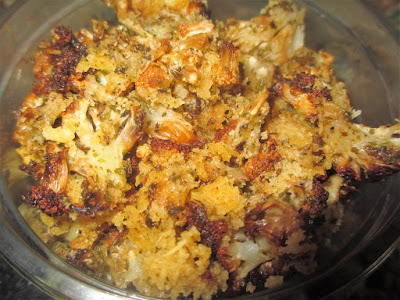 About 10 minutes before the cauliflower was done, I stuck a pan of mackerel in the oven too. I sprinkled the fillets with garlic, black pepper, and smoked paprika before I put them in the oven. On the stove I sauteed some sliced zucchini and onion in olive oil and sprinkled that with garlic and basil. Cooked some baby potatoes too. Bill had fish with the zucchini and some potatoes; I had mine with the cauliflower and potatoes. I made extra potatoes and we will have some in our burritos for supper tonight--I'd cooked a chicken overnight in the slow cooker on Friday night. Our little fridge is filled with prepared food, which is handy and will save time for the next few days.

This morning we dashed out of the house after breakfast and before coffee (!!!!!!!) because Bill had his INR test scheduled. Since the health centre is halfway to the recycling bins, we packed our tins (cans) and bottles (jars) into our backpacks and after he was done we trudged up the hill and got rid of those. On the way back we felt a bit of sleety rain coming down and it seemed like there could be a winter someday. It was a wee bit chilly and soon it might be chilly enough for a scarf or cowl! I think it's supposed to alternate between chilly and mild for a few weeks. Guess we'll find out.

We stopped for a few groceries on our way back home. It is such a different kind of experience, shopping in the wee shop on Main Street. Monday mornings are a hive of activity as they restock. They are actually closed on Sundays. It is rather refreshing, the slower pace of life here. Last Monday was a bank holiday and we called in on Tuesday morning before we stopped at veg man's stall. The shop was full of customers and they were trying to restock at the same time after being closed on Sunday and Monday. Anyway, I always feel good when I shop there--they are so friendly and so nice and I like supporting a small, local business that is so vital to a small village like this. Tomorrow morning we'll be calling on veg man again to give him a bit of business. His prices are good, his food is high quality, he is a friendly, pleasant guy, and he works hard setting his stiff up every week. I asked him last week if he comes all year and he says he does, except for the week between Christmas and New Year, when he takes off. Must be really something to be out there on a cold, sleety, windy, winter day. He deserves our business!

When we walked in the door I made a beeline for the coffeemaker and pressed the button before I started putting stuff away. I am tempted to cast on another mitred sqaure--got two more added yesterday--and I just might start on the next one! 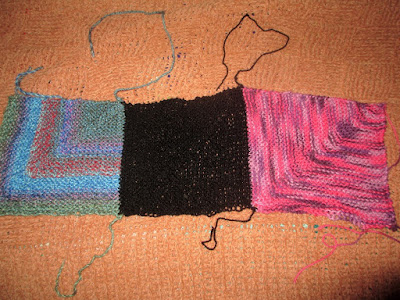 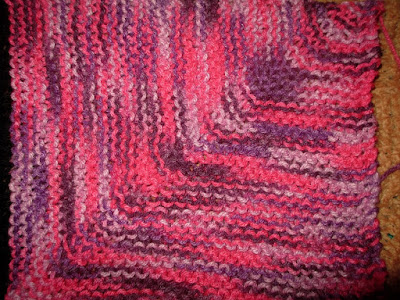 I also have some other projects to work on, so could be a project buffet today--a little of this and a little of that. It's a good afternoon to sit with a book, yarn, hot beverages, and nice music.