I am so thrilled that it is finally October. My best quarter of the year has arrived! I have my little rituals to mark this transition each year. I put certain music on my mp3 player and computer and listen to some every day. And I put out the few seasonal bits I have. Most of this got left behind when we left Maine, but I found a cute jack o'lantern candle holder at the charity shop in Killybegs and that is out. Now that is gets dark earlier we can start burning candles and I will probably start tonight.

This afternoon I finished the placemats I'd been making. I'd gone rummaging in the scrap bag to see what was there and found some balls to use. I did not have much so I had to play around with various ideas to see what would work. I ripped things out a couple of times before deciding to do a simple net stitch. This does not use much yarn and grows quickly. I made my two net stitch rectangles and then had to decide what else to do. I wanted something, because it seemed like they were not quite finished. I tried a few things and wasn't feeling the love, so I set them aside. This morning I glanced at a couple of very simple tree motifs I'd made and it dawned on me--I could use those. I sewed the larger one on the multi-coloured mat and then made another tree in the same yarn. But with the plain brown yarn, it seemed like it could use a bit of a pop, so I decided to also use the smaller tree I'd made out of some sock yarn scraps. That brightened it up a little. If I was the sort of person who set a table, I could have left the top of the tree unattached and it would work as a silverware/napkin pocket. 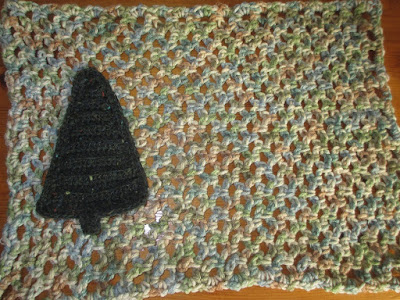 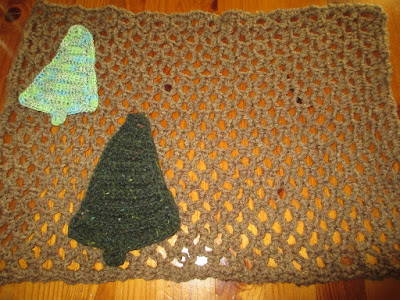 The trees are made from the wide bottom to the top point using hdc through the back loop, decreasing every other row, and then adding a trim, making the trunk as I work around the edge for that. 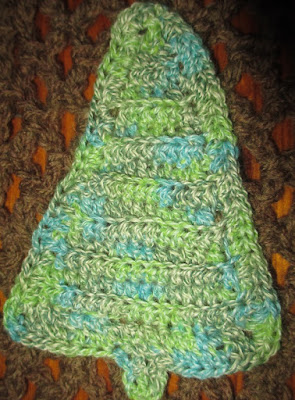 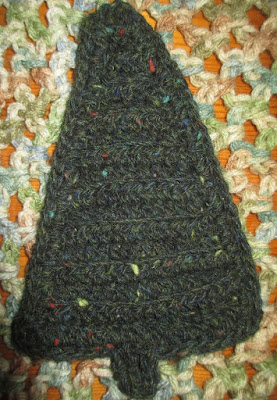 At Christmastime last year, I made some of these and did a surface chain around the edge and sewed a button to the top. 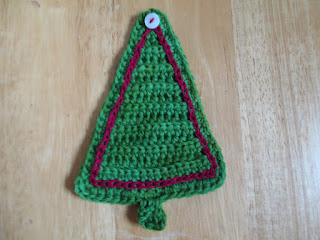 It's been a lovely quiet autumn day so far. Bill was up most of the night watching Red Sox baseball online. Usually he listens, but this was the game of the week on the TV stream, so he watched instead. He slept in this morning, so I got up, had some breakfast, pushed the button on the coffeemaker he'd set up the night before, and took my coffee into my studio room, where I listened to some Anonymous 4 and knit on a sock cuff. That is always the coolest room in the place--unless it is a summer afternoon with the sun streaming through the window. Then it gets warm, but most of the time it is on the chilly side, just how I like it. In a little while it will be time for some Irish sport as the Gaelic football championship match replay gets underway. Mayo will try again to break the curse.

Up Mayo and happy October!
Share
Posted by Shari Burke at 1.10.16