I am not a morning person. Never have been. This means that when I get up in the morning I do not want to be fussing around deciding what to have for breakfast and then preparing it. I make sure I plan ahead. Occasionally I will have some eggs, fruit and toast for breakfast, but we are more likely to have that for supper. I sometimes throw some jumbo porridge oats into a bowl with some milk and stick it in the microwave, adding nuts and cinnamon or jam after it's cooked. Once in a while I have cold cereal from a box or muesli that I've made with or without a banana. For the next few days I will be having some apple-pear crispish. Seems like a nice breakfast for an autumn morning!

I cut up a few apples and a few pears and put them in a pot with a little water. After they'd been cooking for several minutes, I added some cinnamon, a bit of ginger, and a dash of allspice and let it bubble away until I had a chunky fruit sauce. I took it off the heat and added a small splash of vanilla extract. 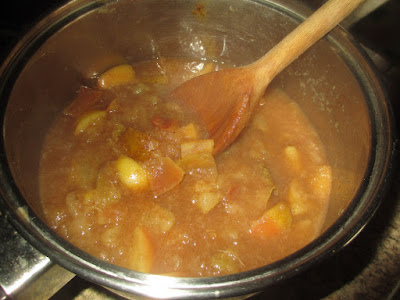 I made some muesli by toasting jumbo oats in the microwave--one minute at a time and stirring after each minute. I had two cups of oats and it took 3 minutes. Then I added coconut, almonds, and walnuts and mixed everything together well. 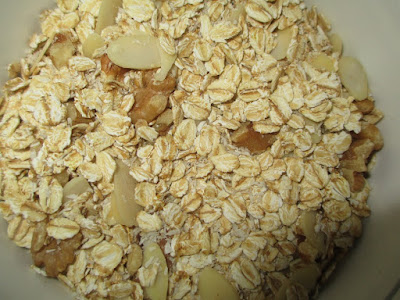 In the morning I will have the apple-pear sauce topped with muesli and a dollop of plain yogurt--sort of like a fruit crisp, but without the sugar. And there will be no thinking required! Yay!