Today there was a garden fete at the Presbyterian church here in Moville.

I was quite excited when I saw the banner for the fete a couple of weeks ago, because I have read so many novels that take place in English villages and there is often a fete. These take place at large country estates usually, and this is Moville, so I knew it would be a much smaller scale, but I was still looking forward to actually going to one.

A friend came up so he could attend the fete with us (he was particularly interested in the home baking), so we were able to have an actual Brit with fete experience there to vouch for authenticity. And he did! He said it was small, but quite authentic. We all enjoyed ourselves.

He said we should get there around the time it opened because all the best bits of baking would be gone if we went later, so we got there shortly after 2, paid our 2 euro, got our stickers, saying 'garden fete' and went to have a quick look around. We soon learned that the tea and goodies were in the hall across the street, so we went there. There was tea or coffee and an impressive selection of both sandwiches (a couple of different types of egg sandwich, ham and cheese, and tuna) and so many delicious looking sweets! I love scones and jam with whipped cream so picked one of those. I chose a caramel bar when I spotted those. And I decided on a shortbread cookie for my last sweet. We were supposed to choose 3 things to go with our hot beverage. It was tricky balancing the teacup on the saucer in one hand while holding the plate of food with the other and then trying to choose the next thing! We managed though and found seats along the wall, where we could sit, chat, munch, sip, and watch the goings on. 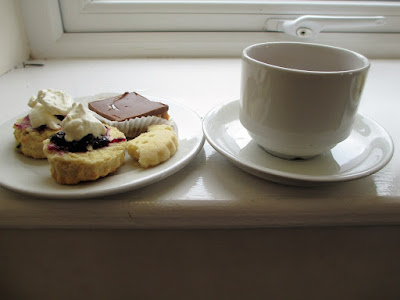 Our friend set his tea and plate down and went off to the 'baking to go' table, where he chose a ginger cake (gingerbread baked in a loaf pan) and what was labeled an almond sponge tart. He was quite right about the baking going fast. By the time we left the hall, they were pretty much cleaned out. There was still a lot of food being served there, but they had a few more hours to go at that point. If anyone came looking for baked goods to take home, they were out of luck! Fete lesson number one--get there early!

After that we wandered back over to the church grounds where there were tables of bric-a-brac, a beekeeping display, a DJ, and a face painter for the kids. There was a bouncy castle, which the kids were really enjoying. 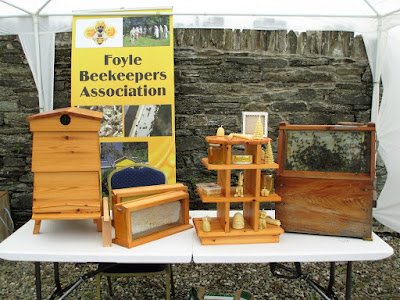 Around the back there were people behind a table full of books. They had no prices, but just wanted people to take whatever books they wanted and make a donation. We found a few--the cat one will be a gift. 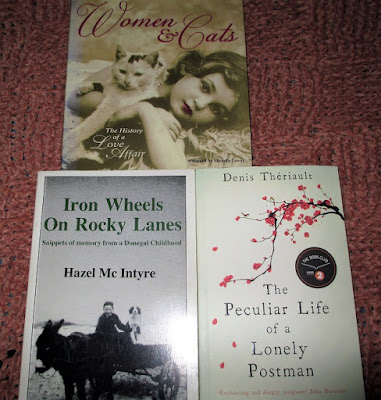 Don't know if the subtitle of the one on the left is visible, but it is: Snippets of Memory from a Donegal Childhood. I was very pleased to find that one! The postman one is a novel and it sounds like an interesting idea--a postman opens people's mail and comes across correspondence from two people who communicate using haiku.

After we left the fete we came home long enough to drop off the cake and tart before heading out again, walking down to the beach on the edge of town, spending some time there, and then walking over to the pier before coming home again. Our friend wanted to try a fish and chips place he'd seen in Greencastle last time he was here, so he and Bill went up there, got the stuff, and brought it home. After supper, we had coffee and some of the baked goods from the fete. The tart was a Bakewell tart--love those. It has a pastry crust, a layer of raspberry jam, and then an almond sponge on top. Both the tart and the ginger cake were delicious! He left us half of each, so we will be able to enjoy them again.

It was a lovely day all around. Even the weather was nice--not hot, breezy, cloudy, and just a few sprinkles.

Hope your Saturday was lovely too!