Herbs on the Landing

We went off to the Moville Garden Centre this afternoon. We had seen the sign in a previous walk, so we knew it was down a lane off the next street over. We did not know how far down the lane it was, but we decided to find out. I wanted to get a bag of compost (dirt) and some herbs.

We walked down the lane and around the curve and were greeted by some sheep--Karen O, they send greetings to you and Ramses :-) 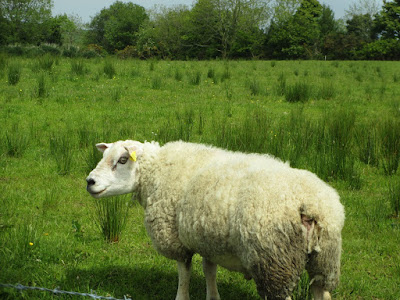 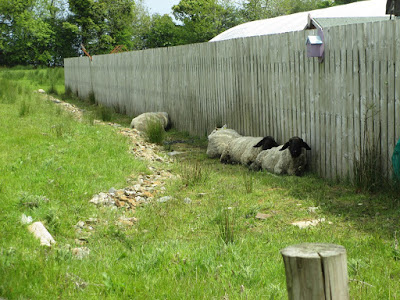 We went through the gates and into one of the two hoop houses looking for herbs. We didn't find any, but there were some beautiful flowers. 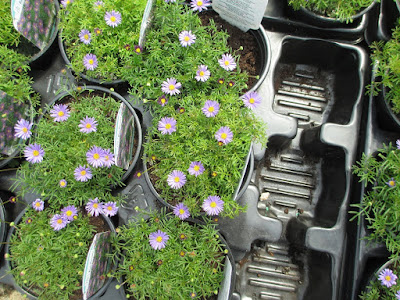 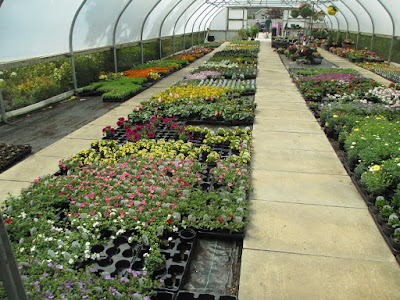 We walked through the next hoop house and there were still no herbs to be seen, but once we were heading out of hoop house number two, I saw a rolling shelf and there were the herbs I was looking for--yay! I picked up 5 plants--fennel, dill, coriander (cilantro), parsley, and chocolate mint. I was quite pleased to see the dill since I had a tough time finding it anywhere last year. I could not find any dried or fresh until the fruit and veg guy had a bag one week. I bought it, dried it, and still have a little bit left. Hopefully this plant will do well enough for me to dry some more. I might go back next week and get an oregano plant. We'll see.

We put the dirt in our backpacks and the guy put our herbs in a tray to which he added a handle and off we went home. 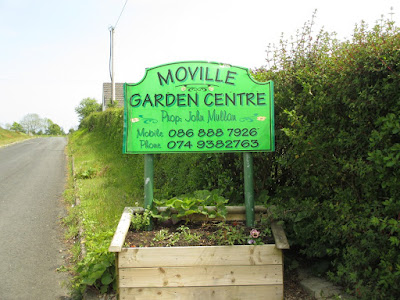 We dropped off our stuff and then went out for a walk. It was warm and close today, but there is always a good breeze coming off the sea on the shore walk--at least when we are heading away from town! On the way back the breeze is at our backs and it feels significantly warmer!

The water was blue and green today. 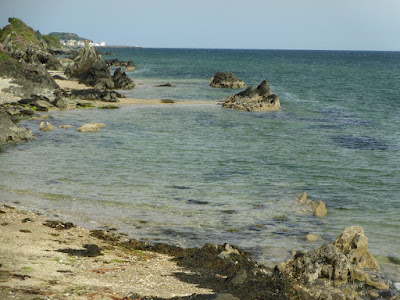 A quick glance might lead you to think that this little tree is dead, but it ain't dead yet! 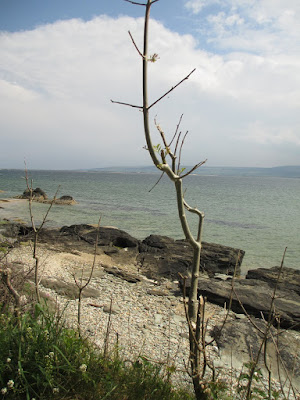 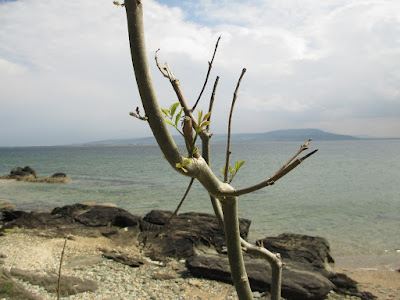 Remember to look up once in a while :-) 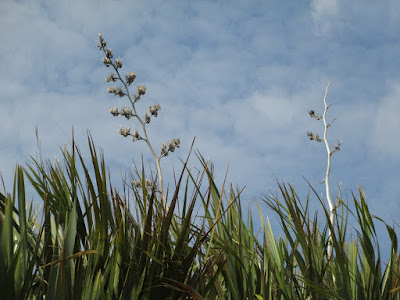 After we got home, I repotted the herbs--they really needed it! I trimmed the cilantro because I used some for supper,and I will trim the others tomorrow. Planted some garlic for chives, too. I also planted some mizuna seeds that a friend ordered for me a while back, after I told her how I loved them when we were doing the CSA in Maine. Now that it is "hotting up" as they say, I will be eating more salads and the mizuna, garlic and herbs will be nice for that.

The best place for these plants seems like it is the window in the landing, so I have put them out there for now even though that is the farthest point from the kitchen. We have a window over the sink that would be great, except that it does not get sun. I kept a container of garlic in the sitting room with the few houseplants we have there and I stuck the chocolate mint in a bedroom--both rooms are on the sunny side of the building. I will just keep an eye on everything and see how it goes, moving stuff around as necessary. 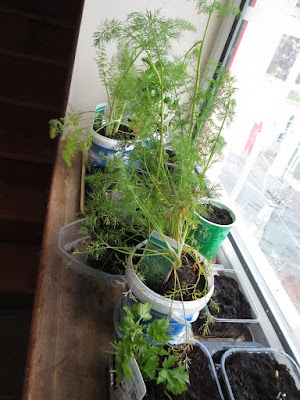 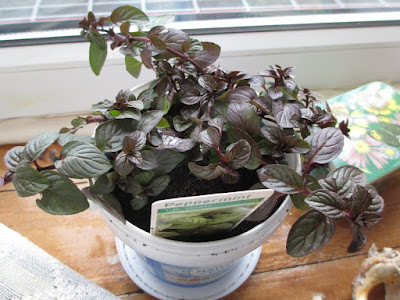 I brought my lemon balm plant from Killybegs and that is doing well on the landing. I have been using it for iced lemon water, which is nice. Now I can add chocolate mint water to the summer repertoire--and look forward to the day when I can enjoy it hot instead of cold!
Share
Posted by Shari Burke at 28.5.16