I finally moved the freezer to a better spot. I had to, since people were coming for supper and the spot where it had originally been placed by the landlord blocked part of the table! 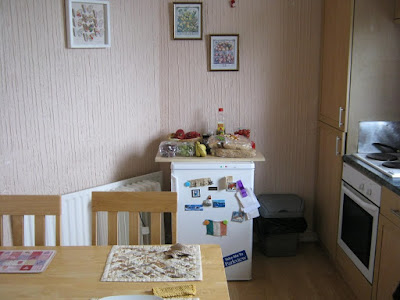 It works out much better there. Not only does it open up the room a little bit, but now the table is unblocked and we were able to move it down a little bit away from the door, providing more space on that side too. An added bonus is that my herbs and spices and stuff are right there for me to grab while I am cooking (I keep them on top of the freezer next to that olive oil bottle). I don't know why I didn't do it before--it was just one of those things that I meant to do but never did.

I made baked fusilli that night with tomato basil and garlic herb sausages, a salad, and bread. For the pasta, I just cooked 500 grams of that and dumped it into a bowl. I sauteed some onion, red bell pepper, garlic, and courgette in some olive oil, added a couple of cans of diced tomatoes, three cans of tomato puree (paste), some oregano and basil. I dumped that into the bowl and added a couple of small containers of cottage cheese and some grated mozzarella. I put it in an oiled baking dish and out it in the oven for 20 minutes or so, then plunked the sausages on top and cooked for another 20. This served the 5 of us with leftovers.

For the salad I just sliced some Irish cucumber and cut up some cherry tomatoes. Then I sprinkled with oregano and granulated garlic, grated some of SuperValu's dried chilli mix into it, and drizzled with cider vinegar and olive oil. 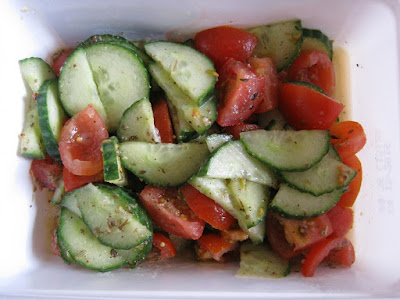 When everyone arrived, they brought with them some bread that a friend had made and some artisan butter with sea salt. Yummy! 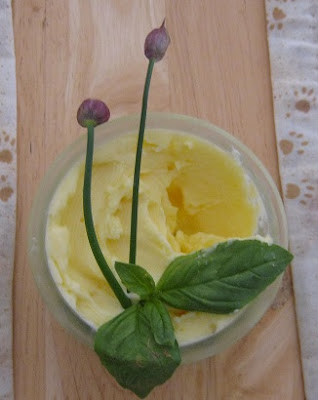 I just love the presentation here! You can tell Theresa is a florist! The basil is wilted because I took this the following morning and it had spent the night in the fridge. You can see we'd already dug in at this point! 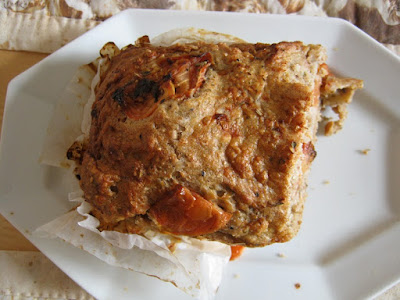 The bread is tomato herb and it is delicious--especially warm with some of that butter melting into it!

Of course as we sat around the table one of the topics of conversation was food. Theresa asked Bill if there was any food he missed and he mentioned pepper cheese. We also talked about fish--this town is built on fish. This afternoon there was a knock at the window and I opened the door to find Theresa holding a basket with some trout that a friend had caught and given to her, a block of cheese, and a dish of little peppers! She said if we ate the peppers and cheese together, maybe it would be sort of like pepper cheese! How cool is that!? It really is amazing cheese and is delicious with the peppers! I think she said she got it at SuperValu--I will have to look for it.

I decided to cook the trout for supper. I had a bag of frozen Mediterranean veggies in the freezer--it was the first time I'd bought them. I decided I should try them and see whether they were worth buying again so I threw them on a baking pan and dressed them up just a little. It was a mix of potatoes, courgette (zucchini), cherry tomatoes, bell pepper, and onion with black pepper and basil as seasoning. I sprinkled on some oregano and granulated garlic and drizzled a bit of olive oil over it all. I cooked these until they were about 10 minutes away from done and put the fish on top. I'd sprinkled that with garlic, basil and oregano as well. Once the fish was cooked, we ate. It was delicious and oh so simple! The veggies are definitely worth buying again, so I will be keeping some in the freezer in future!

It's a bank holiday weekend here so naturally it will continue to rain. That is just dandy with me, but some people don't care for it. There could be grass frost tonight, but hey, there are "good sunny spells" in between showers. Monday is supposed to be windy and rainy though, I think, with temperatures that would be normal for March. That is my kind of summer :-)
Share
Posted by Shari Burke at 29.5.15