When we arrived at the cottage in Killybegs the other day and I was getting the door open, a guy appeared from somewhere and said, "Hi Shari and Bill! I'm Tim. I just wanted to say 'welcome.' I understand you don't have a car, so if you need a ride somewhere or anything else, just come and find me. I am either with Theresa or over there. I'm here until Sunday--I go between here and Belfast. I know you are in transition now and won't keep you, but I wanted to welcome you here." A while later we were going out for groceries and saw Jason, one of the guys who lives there and does a lot of the physical labour involved with the gardening--Theresa says he does the heavy lifting and she does the designing. "Hiya!" he said with a wave. From somewhere out of view we heard Theresa call out her greeting.

We got our groceries and came back. Theresa and Tim were talking to an elder guy and they introduced us to Jackie, the resident historian and philosopher. Jackie lives next door and down the hill a way from the Coast Guard station. He said to us, "I'd like to welcome you to the Coast Guard Station."

Jackie left and we chatted with Theresa and Tim. Tim said that if we have anything heavy and wanted him to, he could come drive down and help us get it up there! We'd been talking to the guy for less than 10 minutes and there he was offering to make an 8 or 9 hour round trip and help us with heavy stuff! What a nice thing to say! It seems as though we are moving into a nice little neighbourhood up there on the hill.

The next afternoon after we'd rearranged the bedroom, unpacked, and put away what we could, we headed out to do our errands. The plan was to go to the charity shop to look for a spatula, a slotted spoon, and a ladle. On the way, I noticed a sign on a store that I'd not paid attention to before. There were shoes and clothes in the window so I took no notice, but this time I looked up and saw a sign that said, "household" with a photo of a bed. "Maybe they sell pillows!" I exclaimed as I crossed the street. We walked in and I asked the woman, "Do you sell bed pillows?" "What kind of pillows?" she asked. "Bed pillows," I repeated.  She laughed and put her hand on my arm. "I thought you said GOOD pillows!" she said as she headed off toward the stairs. The pillows were downstairs and as we started down, I told Bill that it smelled exactly like Nana's house when I would go down into the basement!

She showed us where the pillows were and heard someone come into the store upstairs, so she left us there. She had duvets too and we briefly discussed getting one or two, but decided against it. I like the idea of duvets, but they are too short and I always end up with my feet sticking out!

We took a couple of pillows and went upstairs to pay. She handed Bill the change and suddenly placed her hands on the pillows and had a concerned frown on her face. "Do youse have a car nearby?" she wanted to know. "No," we replied, puzzled. She was concerned about this and Bill explained that we could just carry them home as we were moving into the Coast Guard station and it was not that far. "Are you sure?" she said, uncertainly. We tried to reassure her as we took the pillows and left.

We were almost at the charity shop so on we went, carrying our new pillows. I looked around for yarn, but alas, there was none. Grabbed the kitchen utensils I needed though and then walked over to a different part of the shop. Bill spotted some cream coloured blankets folded on a chair. They looked like they had a decent wool content and we needed blankets. At 4 euro a pop, the price was right too, so I took two of them and went to pay. She threw in the utensils for free and put everything into a bag. The blankets were kind of heavy and the pillows were bulky, so I took the former and Bill took the latter and we headed home. Once there, I put the pillows in cases and examined the blankets. Turns out they are pure Irish wool. Yay! I am a big fan of wool--I think it's magical. One blanket has a small hole and one has a small tear at the end. Both issues are easily fixed and the blankets themselves are sort of a canvas. For now I will leave them as they are, but in the future, I might embellish them or use them as a backing for some stitching. Right now I am just happy that I did not buy a duvet--these are much better and bigger!! 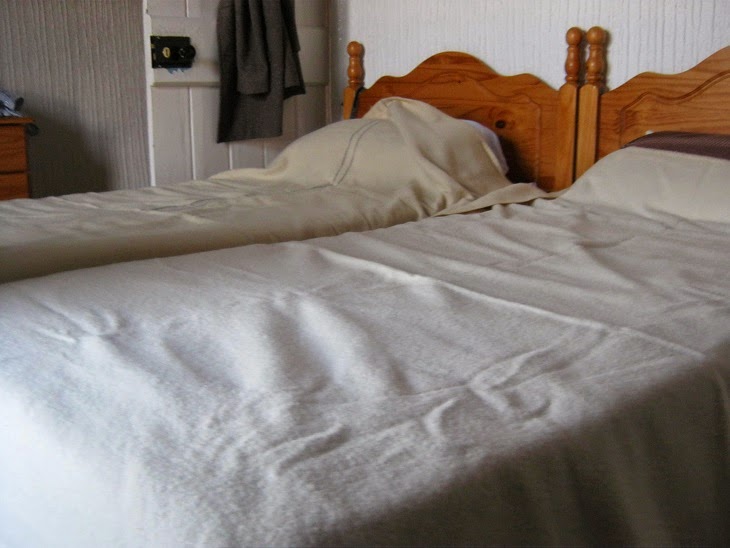 After that was done we headed out to finish our errands. We wanted to stop at Centra (which seems to be known as "Hegarty's" to the locals so I will have to get used to calling it that) to buy something with which to make lunches for Friday's trip back to Ballinrobe. We also wanted to stop at the B&B where we'd stayed a couple of weeks before to pick up the cones of yarn the owner had kindly stored for me.

We went into Hegarty's and picked up some smoked salmon and rolls--we had some cream cheese at home. We were looking at something when this guy came up to Bill and said, "You were taking it easy earlier!" Bill agreed. I saw that it was the butcher from down the street and he was talking about Bill carrying the pillows! I have to chuckle--it did not take long for us to be known as "those people who walk around with backpacks" here in Ballinrobe. In Killybegs we can be known as "those people who walk around carrying pillows!"

We went to pay and the very friendly and helpful guy who checked us out asked if we wanted a small knife. "No thank you," I said. "Are you sure?" he asked. I assured him that we were good and thanked him for the offer. It dawned on me that he thought we were tourists who planned to eat lunch outside somewhere. I thought it was very thoughtful of him to ask.

Last stop, B&B. We rang the bell and Gerry, one of the owners answered. We went in and he apologized, saying Patricia wasn't home but he would see if he could find the wool. There was a guest in the entryway so I explained why we were there. She perked up. "Where is this charity shop? I must stop there. I am a wool person myself!" Gerry came back and said he couldn't find it but if we came back after 6, Patricia would be home.

We went back later and he answered the door again, saying he was just thinking of us and she still wasn't back. I told him I could come back next week and he said he'd call her. I said it was no bother to come back and he shouldn't disturb her, but he said he would and went off to do that. The guest was in the sitting room so we went in and talked to her some more. I'd spotted a skein of sock yarn on the table outside and asked if it was hers and what she was making. We had a lovely conversation, Claudia from Germany and I, about socks, magic loop, wool, knitting, crocheting, and some other stuff. I kept having to switch from "yarn" to "wool." Meanwhile, Gerry came back with the yarn/wool and talked to Bill, saying we will never regret moving to Killybegs. 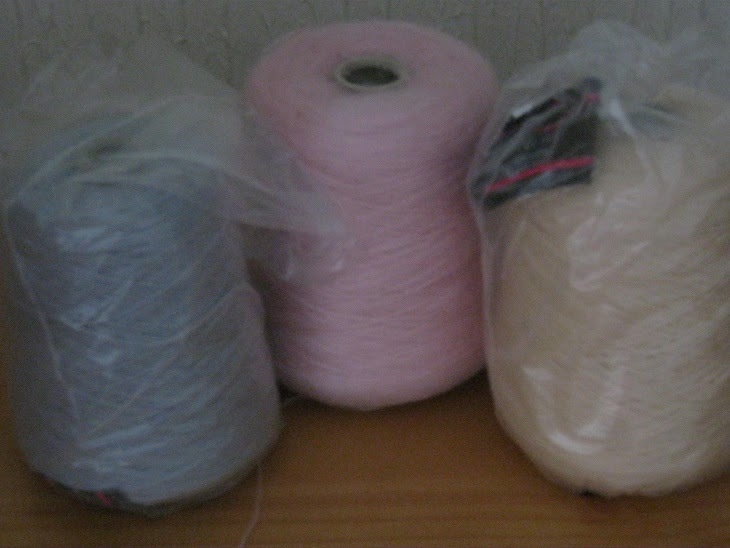 We bade Claudia farewell and wished her a good trip--she had decided to extend her stay for a day or two--I don't blame her! We walked home and Theresa, Tim, and Jason were out working again--they are working so hard on the gardening. There are pots all over the place and flowers in the flowers beds. It already looks nice and I bet it will be spectacular this summer! We chatted for a while and Theresa reiterated an earlier offer to drive us anywhere we needed to go, even offering to drop us off at the beach in her pjs :-) After a while Tim said, "Remember, if you need me to drive down there and help you with anything, just let me know!"

I patted Fergus, the little white elder dog, who is 12. I think of him as Superman because when I met him last week he had on a T-shirt with the Superman logo on it. We learned he is diabetic, so will not be able to spoil him with treats.

After a while we went inside and shortly after that they stopped working for the evening. Things slowed down at the Coast Guard station. I knitted for a while and then brought a book upstairs to bed. I wished we did not have to catch a bus out of town at 7:55 the next morning. In a week and a half we will get there knowing we will not have to leave again in a couple of days. I am looking forward to that!