Another Productive Round Trip

We got back a few hours ago from another trip to Killybegs and back. We had a larger load this time--two rolling suitcases and our backpacks. One of the suitcases was a larger one and they were both heavy, containing as they did a bunch of books. As I was dragging the bigger one up the hill that is our driveway I had cause to ponder the fact that gravity and I were working at cross purposes.

We had a really pleasant trip up there--made the early bus from Galway with a couple of minutes to spare. That meant we got into Killybegs at 2:15 instead of 4:45 and that was such a treat. We got to the grocery store and back and could just settle in for the rest of the day and night. We didn't do anything else that night except hang out in our new home and it was really nice to just sit and relax. I took a shower, made some coffee, and sat reading a book I'd started and left up there the week before. It was quite relaxing.

The next morning I couldn't wait any longer to rearrange the bedroom furniture. The place has small bedrooms and comes furnished. Like most other places here, there are no closets, but wardrobes instead. These are large and take up floor space.

The spare room really has to stay as it is. It is a really funky shape with angled walls in a couple of places and hardly any room in the small section without the angles. There is a double bed in there which sits in a corner. There is possibly a foot of space between the edge of the bed on one side and the other wall. 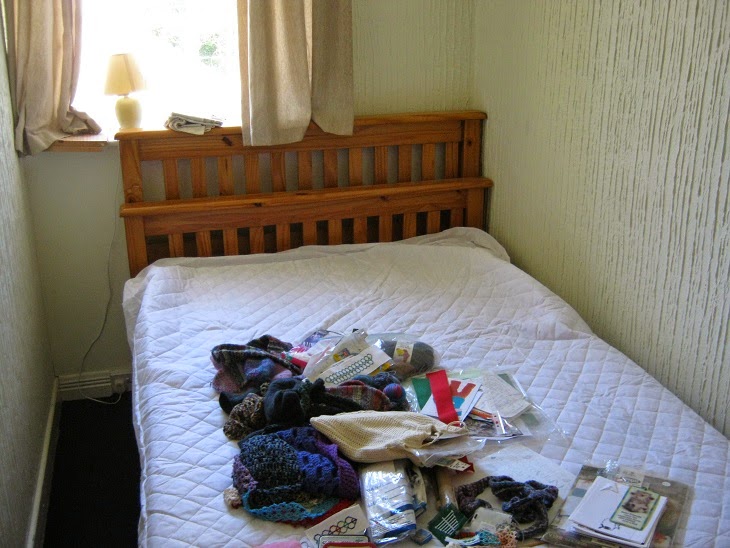 This is what the rest of the room looks like. I was standing with my back against the window sill when I took the photo: 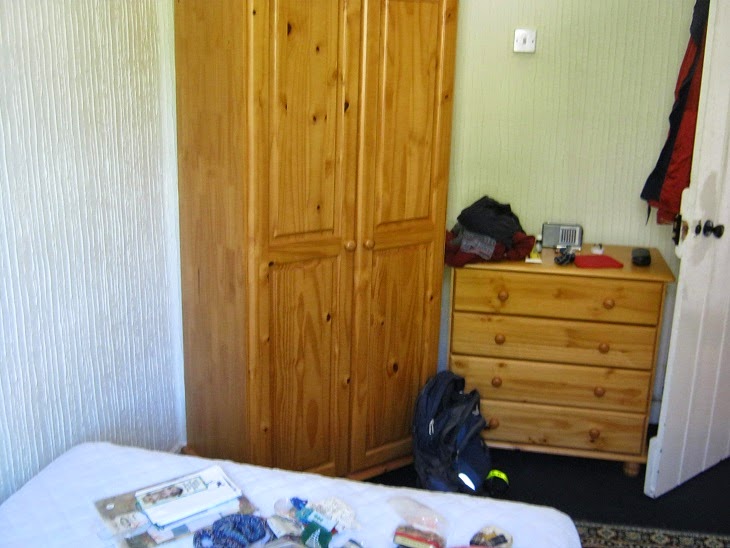 This room is perhaps 6 feet wide and possibly 10 feet long. Given the angles and the furniture, which we can't put anywhere else even if we wanted to, there isn't anything we can do here, so we will just put sheets on the bed and that will be that!

The other bedroom is a bit larger--possibly 8 by 10--and it also has an angle, a wardrobe, and a dresser. In addition to that there are two single beds and a few other things. At first we briefly thought about switching the double bed into the front bedroom and placing the other beds in the back bedroom, but we quickly realized we would never fit both beds in there. We can't take the beds apart because they are all wood slats and put together with screws and stuff. Even if we could move furniture, given the close quarters that would be tricky.

When we got there the two single beds were lengthwise along two walls with a little space in between. Because of the angle, one was more forward than the other. We turned the beds around and pushed them together. 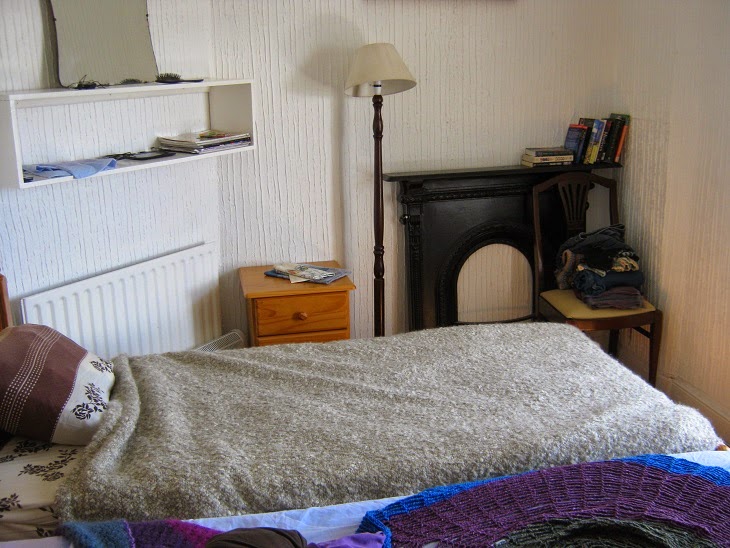 This is the view from the bed: 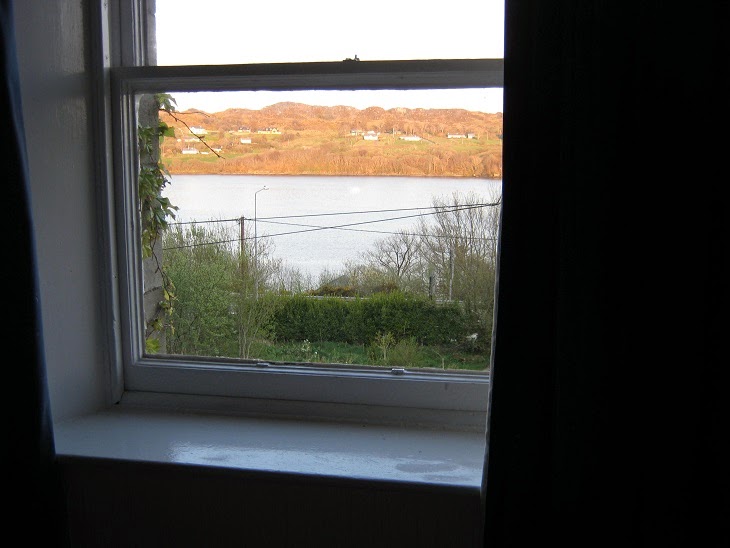 This is the room from the spot where the chair is: 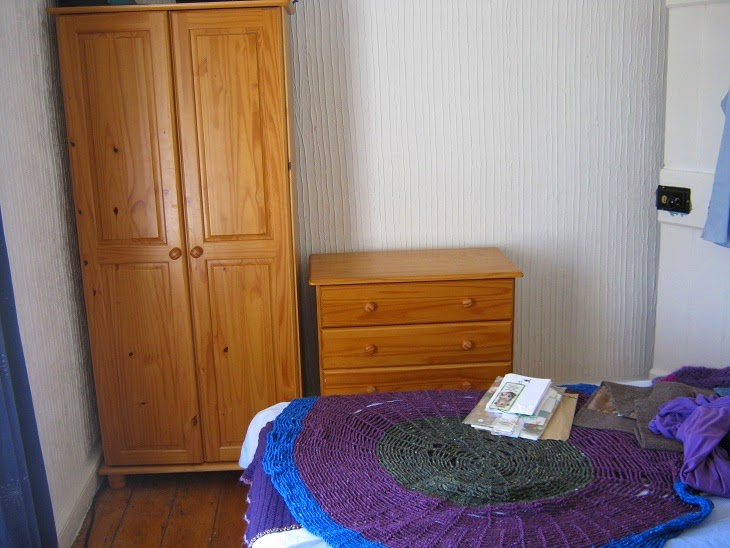 The wardrobe was originally turned sideways, which was kind of silly--you couldn't even open the doors all the way. With everything rearranged like this, it is now a comfortable, pleasant, and functional room.

You can see the improv bed linen--we had sheets but no pillows or blankets. The couch had a couple of small blankets as covers--one on the seat and one on the back--so I put those on one of the beds and just piled shawls onto the other one.

Here is a 270 degree view of what we see from our bedroom doorway. The 4th direction is a wall. 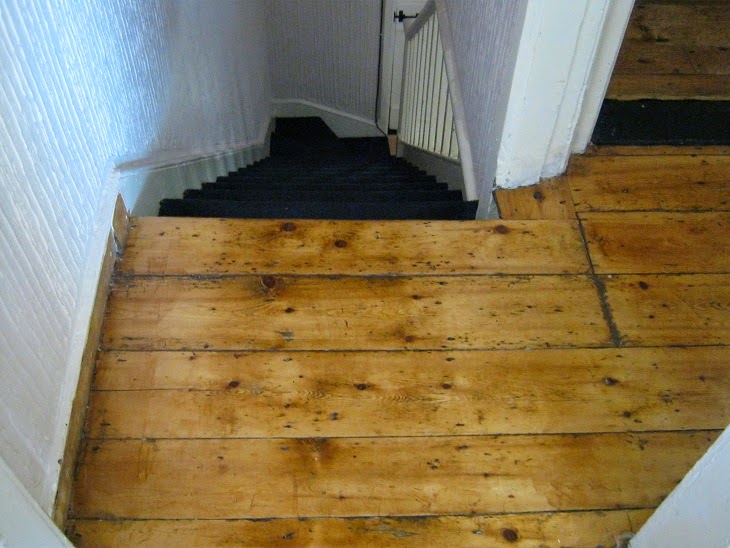 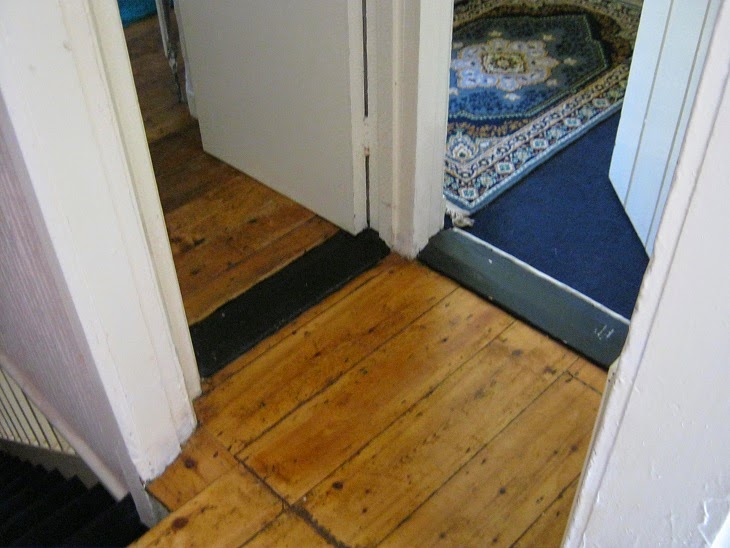 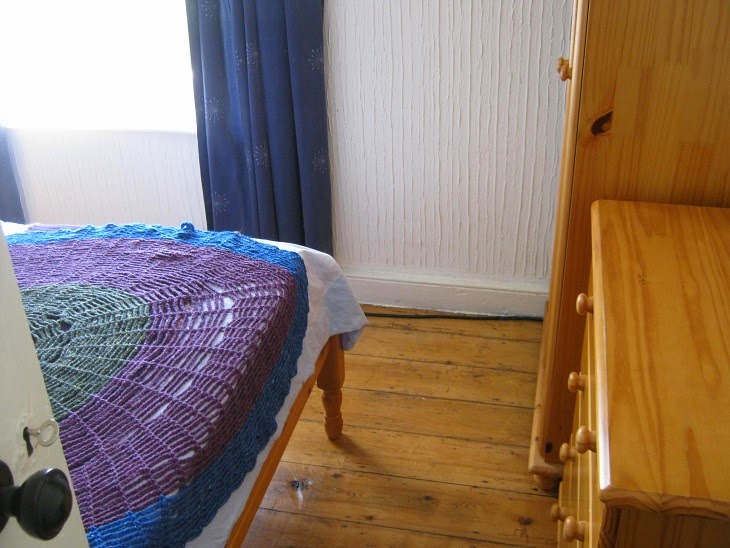 The doorway on the right is the spare room and the middle doorway is the bathroom. 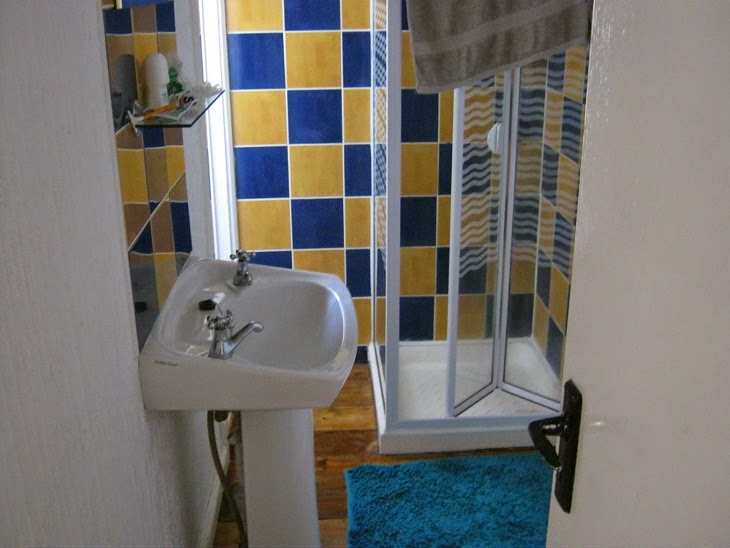 Walk past the sink and stand by the shower and you get to the little alcove with the toilet on your left. 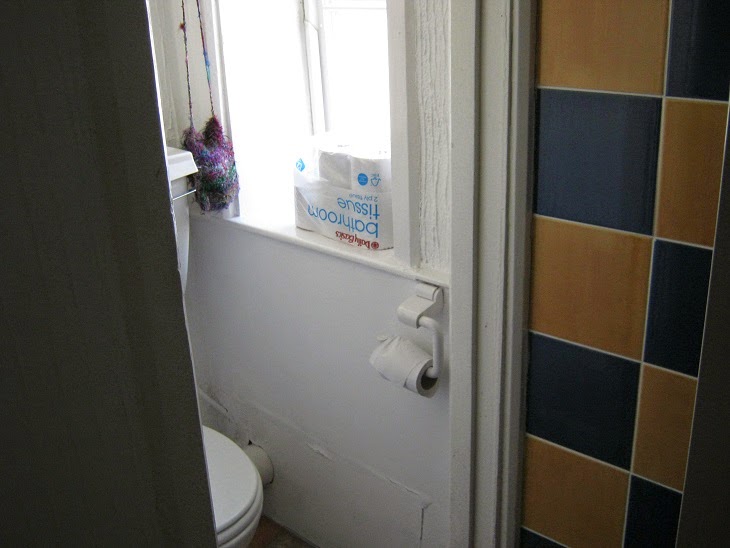 There is a little step and the alcove has its own light switch and light. The shower is an electric shower so it heats the water as needed.

We can also use the water heater on an "as needed" basis. We've been told it can run on oil or we can just flip the electricity on for a few minutes before we will need it and we will have hot water. I wondered how well this would work, but so far so good. I plan to only use it when I need it. It's an immersion hot water heater and the water easily gets extremely and dangerously hot.

It was nice to get the bedroom arranged the way we want it. We unpacked and got some of the stuff put away with the rest out of the way on the extra bed. That left us the rest of Thursday free and it turned out to be equally productive. That's a story for tomorrow. Right now I need some coffee!!