This morning after breakfast we went off to SuperValu for milk and bread and then to Country Market for fruit, veggies, and eggs. 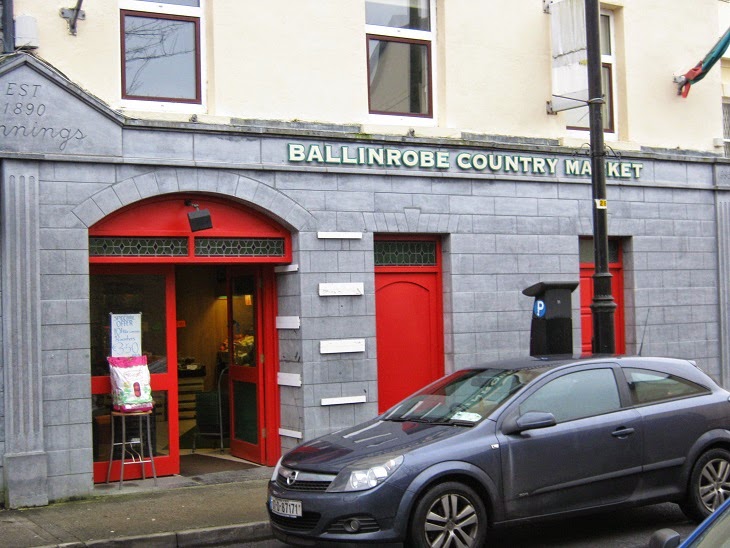 I really like this little place. It's one small room full of produce and the guy who is always there is such a nice and pleasant person. Last week when we were in there Bill was picking out some apples and an older woman was paying for her produce. She was a little bit short of cash. "Ah, never mind then," the guy said, "We won't let a few cents come between us now." When we were done and paying, he was telling us how there used to be a lot more snow around when he was small. When he was a boy, he'd go to Donegal with his family over the holidays and there was always lots of snow up there, he said. Today we were paying and the total came to euro11.06. Bill was getting the .06 and the guy said, "Never mind that."

I came home and made some corn salad for lunches. I can eat it either hot or cold. 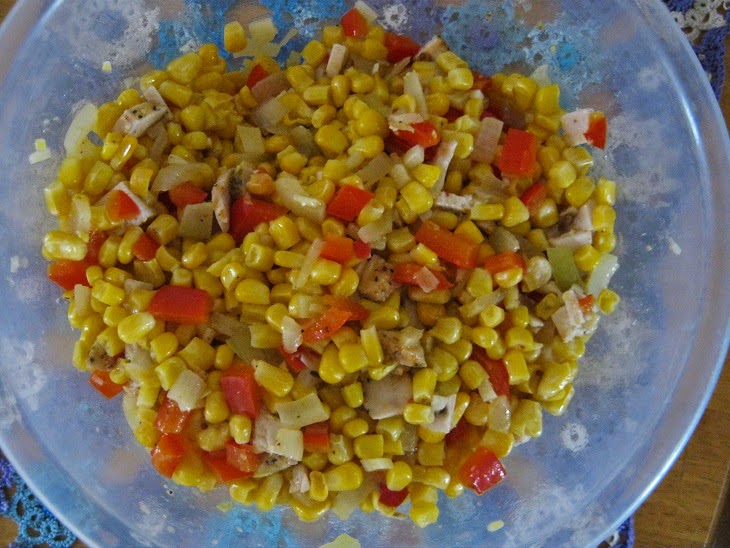 I chopped up 2 large cloves of garlic, a couple of smallish onions, and a red bell pepper, tossed them in a puddle of olive oil in a pot. I cooked them for a few minutes and then added about a pound of frozen corn, stirring until everything was heated through and well mixed. I dumped this into a bowl and added some chopped pepper turkey, which we found in the clearance section of SuperValu this morning. I'll add some cheese when I eat it.

I mixed it with some lime vinaigrette. I had a mustard jar that had a small blob of mustard on the bottom and all the stuff that gets left on the side, so I made the dressing in that by adding the juice of two limes, twice that amount of olive oil (I eyeballed it, so don't know exactly how much of each), a small love of garlic, chopped, some oregano and a bit of chili powder. Then I shook it all together. I have some left for other salads.

I wasn't planning on adding the turkey until I saw it on clearance at the store, and in the past I've made versions of this without it. I've made some with cooked beans and some with just the veggies. I've added some salsa and tomatoes, cilantro or parsley. I have a lot of garlic chives at the moment--the garlic I get at Country Market really grows quickly and well into garlic chives. I've added mixed greens in the past--this salad lends itself well to having a bunch of stuff added, depending on what you like and have on hand, or it can just be basic.

I have a small bit of hummus left that needs to be eaten, so I will make a piece of toast and spread it on that. I'll have that with a bit of my corn salad for lunch.

Speaking of lunch, I am getting hungry! Happy Friday!