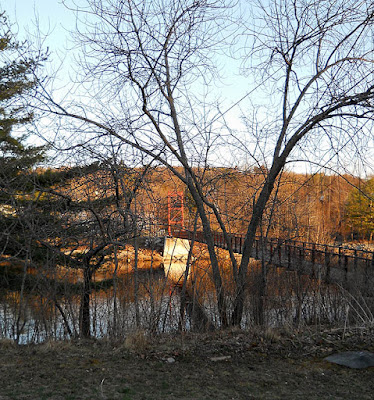 One of Bill's goals was to start walking to work and back once the ice was gone.  It's about 2 1/2 miles each way.  Yesterday he did it!  Then he did it again today! He felt good and made good time.  He walked over the walking bridge to cross the river on the way in and came back over another bridge on Main/Maine St (it is Main St in Topsham and Maine St once you cross into Brunswick).  Yesterday, I met him on Maine St when he was on his way back because I had been visiting with a friend.  Today I decided to surprise him by showing up in time to eat supper with him, so off I went.  I left not really knowing what it was like outside except that I could see it was sunny and windy, although it had been cloudy and calm earlier.  I donned my trenchcoat (from which the lining had been removed a couple of weeks ago), had my headband in my pocket in case I needed to protect my ears from the wind, and a hat in my backpack in case it got cool enough for that on the way home.  By the time I reached the river, I was roasting, so I unbuttoned my coat. 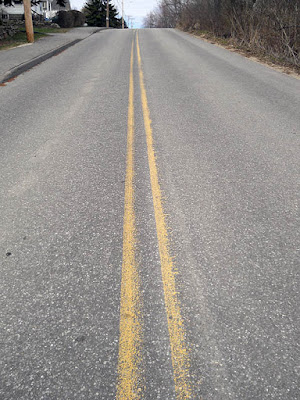 As soon as you get over the river, there is a fairly good-sized hill.  I made it about 2/3 of the way up before I had to take action. lest I burst into flames.  I was boiling!  I took off the trenchcoat and stuffed it in my backpack.  I was still hot the rest of the way in, but at least the hill was behind me.  When I got to Access Self-Storage, Bill had to buzz me in.  He was surprised and I was amazed at how freaking hot it was in there.  It was about to get hotter as the sun started setting after a couple of hours and beamed right in through the windows.  It was in the 80s in that office.  When we did the walk-through just before closing, it was so nice to wander around checking on the units in climate-controlled comfort!  When we left for the 2 1/2 mile walk home, the wind was blowing and it was cooler.  By the time we reached Maine St, I was unbuttoning my coat again.  Still, it was nice to take a good walk again.  We have not done as much of that as we used to and I realize that I have missed it.  I was thinking on the way in how grateful I am that Bill is doing so well that he can do this, that I live in a place where there are good sidewalks and places for people to walk, that the scenery is pleasant, and that I am the kind of person who wants to live at a slower pace.  I notice things and have time to think about things because I am not running from one thing to the next.  I sometimes get busy, of course.  Who doesn't?  I used to live that way all the time--especially in grad school.  At some point, though, I realized that I was done with all that.  I did not want to live that way anymore.  I wanted to slow down and drop out of much of the culture I was living in because I realized that my material wants and needs are few and the kind of life I did want to live required time more than anything else.  So I did not get a driver's license when we moved from Alaska to southern Oregon and I began living a different kind of life.  When I have too many really busy days in a row I get annoyed.  I have little tolerance for that kind of thing anymore.  I like the slow and steady pace of my life and what it allows me to do.  Walking is a part of that--it's my exercise, a political statement, as well as an ethical approach to my life.  Most people cannot understand why we walk or that we want to walk until I explain it to them.  Then they usually get it--even if they still think we're a little weird!
Share
Posted by Shari Burke at 1.4.12 0 comments