Where Has Winter Gone? 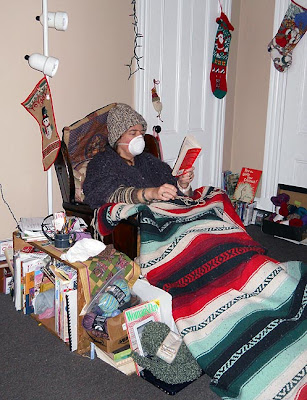 It is January in Maine. It is supposed to be cold--or at least cold-ish. Today it was in the mid-40s. We did not turn on the heat until the week before Christmas and we only did it then because we were supposed to have single digit temperatures one night and we did not want to risk plumbing damage. We have a Monitor stove that runs on propane that we keep set at 54 with the economy switch on. This means that when it comes on, it will run at a steady pace until it reaches 66 degrees in here and then it turns itself off. This is better than having it run on the regular setting where it only goes to 4 degrees above where you set it--then it keeps coming on and going off. The way this all works we end up with the indoor temperature in the 56-62 degree range most of the time. This is good for us as any warmer makes us feel stuffy and uncomfortable. We also open the blinds on our living room window and the 2 in the bedroom which lets the sun stream in and heats the place pretty well. The living room window does not fit the frame properly and there was cold air coming in around that, so I packed a bunch of weatherstripping all around. The end result of all of this is that the heat rarely comes on during the day at all. It has not been on today since before I got up at 7:30ish. I do not know whether it came on last night. it is currently 62 degrees in here with the sun setting. It feels slightly stuffy.

We are supposed to get cooler temperatures in the week ahead and tomorrow night it is supposed to get down to around 0. The problem is that in between days of 20-something degrees, we will have days when it gets close to 40 again. I am not sure things will actually freeze and I really wish they would.

The week before Christmas, Bill and I were walking around doing errands. It was a warm day; I had a heavy backpack on; and I was sweating. We were coming up the hill just before home and I was breathing hard. I went about my day. I went to bed and felt like I had been hit by a truck--my whole body ached. I began shivering and my teeth were chattering. the next day I started coughing. I kept on coughing for a week and a half. After nights of being awake coughing and coughing and not only not sleeping myself, but preventing Bill from sleeping as well, I decided to just sleep in the chair sitting up. This was around the time that we turned the heat on and the dust and propane fumes made things worse, so when it came on, I put on a mask.

At the same time this started for me, Bill started itching. After some googling, it appears that exposure to mold is the likely culprit. I did not have allergy issues until I moved from Fairbanks to southern Oregon, but then I just became sensitive to more and more stuff. Now that winter has abandoned us and things are not freezing, there is more opportunity to breathe in the toxins. Yesterday morning it was sinuses and the whole body ache again. If things would only freeze, maybe there would be some relief before everything starts budding and blooming again. Sigh.
Share
Posted by Shari Burke at 2.1.12